If Roger Federer had a two-handed backhand, how would it affect his career?

This is a really interesting question because it provides a glimpse into the evolution of tennis as a sport. First, I’ll explain how the sport has evolved and then imagine Federer’s game as a two-hander.

Since the Open Era, the two-handed backhand started to be developed as a response to the big servers who dominated the game on very fast courts. As court surfaces and ball speeds became more uniform, the two-handed backhand became an offensive weapon as back court player who could attack high balls and change directions became the counter to all the players camping out in the backhand corner and hitting inside-out forehands.

1970’s: Court speeds fast (except clay which is super slow). Players who grew up with a one-handed backhand have to have a slice in their repertoire for defense and low-bouncing approach shots. Very few top players use the two handed backhand, and the ones who do are still trying to figure out the best way to do it. Chris Evert hits the modern two-hander (off hand dominant, holds onto the racket all the way through follow through), but can barely volley. Borg hits a bizarre backhand (Eastern or Continental grip for the backhand, right hand is dominant, left hand lets go of the racket just after making contact), and was never a strong volleyer (weak wrist resulted in soft volleys that died on grass, but set up on hard courts). Connors was half way between Evert and Borg. But he was a naturally offensive player who was comfortable coming to the net. Here’s a cool video of Connors vs Laver: 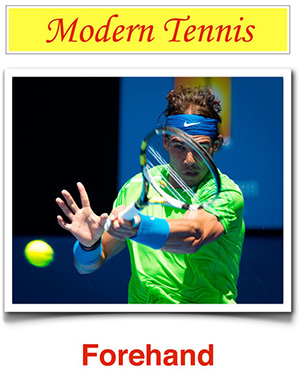