Whitney Henriquez, sister of Amber Heard, harshly attacked Johnny Depp's performance during the MTV Video Music Awards ceremony, at Prudential Center in Newark in New Jersey. Johnny and Amber separated in 2017 and 2022, the star actor of the Pirates of the Caribbean saga won the libel trial against his ex-wife.

Whitney Henriquez, talking about her about her former brother-in-law at her MTV Video Music Awards, explained on her social media: "I just hope none of the people who wanted him have daughters. You're disgusting and clearly desperate."

During the trial, she had testified about Depp 's assault on her sister, who allegedly hit her in the back while she was on top of a closet, then grabbed her by her hair and destroyed her closet. Joking about his presence at the event, Depp explained: "Hey, you know what? I needed to work!

I'm available for birthdays, bar mitzvahs, bat mitzvahs, weddings and whatever you need. Anything!" 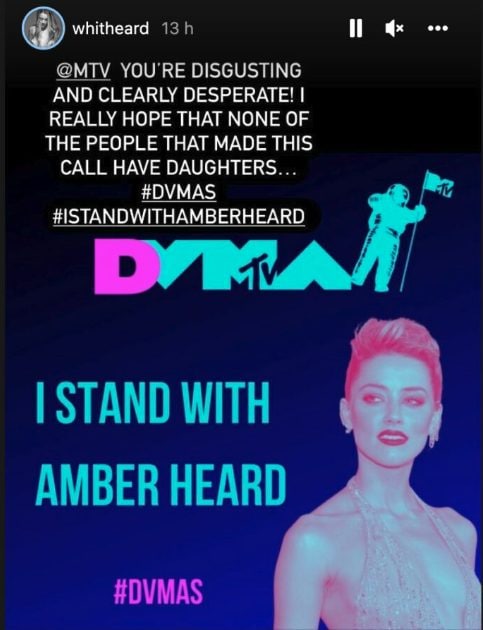 Weeks ago, Amber Heard has called for an overturned trial against her former husband Johnny Depp in Fairfax, Virginia.

According to her lawyers, the sentence is not supported by sufficient evidence, it is inconsistent and discordant. According to lawyers Johnny Depp has not always presented any evidence that Heard has not been abused. Hence the request for a new trial.

The judge has already made it clear that he is not willing to schedule more hearings for this case and that on June 24 he filed the final sentence of the report, specifying to Amber Heard's lawyer that if he wanted to appeal against the jury's verdict he would have to present motions to the court.

Heard has lost the libel trial against former husband Johnny Depp, and now she will have to pay the actor eight million dollars, money that, as she herself stated, she would not have. According to her latest rumors, Amber is also thinking of selling an engagement gift, a Model X electric car, received by Elon Musk, her former boyfriend.

Meanwhile, Amber has also signed a contract to tell her story with Depp one more time. Hoping that, her lawyers confide in her who have decided to supervise every comma of the text, she doesn't end up getting into trouble again.