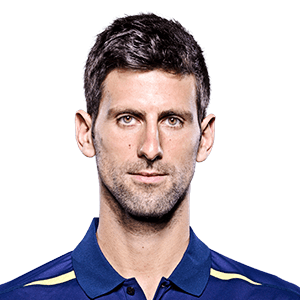 2004 - Year-end top-200 position after another great season, winning two Futures crowns and two Challengers in Budapest and Aachen. The first ATP win at the age of 16 in Davis Cup against Latvia

2005 - The youngest player on the year-end top-100 list after 11 ATP wins from 22 matches. Novak qualified for the main draw in Melbourne for Grand Slam debut and he scored the first win on the biggest stage at Roland Garros, beating Robby Ginepri in straight sets. At Wimbledon, the youngster came from two sets to love down against Guillermo Garcia-Lopez to reach the third round and crack the top-100 for the first time, winning two matches at the US Open as well. Played only two tournaments after New York but it was enough to finish in the top-80 for the first time in a career

2006 - The first big year on the Tour, winning 40 matches for the place in the top-20 (the youngest player in the group) and lifting first ATP titles in Amersfoort and Metz. Djokovic had 11 wins before Roland Garros but he was on a roll in the rest of the year, advancing into the first Grand Slam quarter-final in Paris. Novak won the title in Amersfoort and retired against Stan Wawrinka in Umag in another title match in the following week. The second title came in Metz in October, preparing everything for an even more serious run in the years to come

2007 - After 40 ATP wins in 2006, Novak raised the level and counted to 68 in 2007, reaching seven ATP final and conquering Adelaide, Miami (the last teenager with Masters 1000 title), Estoril, Canada and Vienna. Novak was the youngest player in the year-end top-10 group and the biggest rival of Roger Federer and Rafael Nadal, beating them in three out of 11 encounters and back-to-back matches in Montreal for his second Masters 1000 crown that year. Federer ousted the young Serb in the fourth round at the Australian Open while Nadal prevailed in the title match at Indian Wells before Novak went all the way in Miami for the first big trophy in his hands. The Spaniard was too strong in the semi-final at Roland Garros and Wimbledon while Roger toppled him in three close sets in the final of the US Open. Novak had nothing left in the tank by the time for Masters Cup, losing all three matches in straight sets to finish a great season with five straight defeats

2008 - Novak was the year-end top-3 player for the second straight year, having a chance to move ahead of Nadal during the clay season twice. At the Australian Open, Djokovic went all the way to lift the first Grand Slam crown, taking down Roger Federer in the semis and losing only one set in the entire tournament in the final against Jo-Wilfried Tsonga. The second big title of the season for the Serb came at Indian Wells, conquering Rome two months later and losing to Rafael Nadal in the semi-final in Hamburg and Roland Garros. The Spaniard prevailed against Djokovic in the final at Queen's, losing another tight title clash to Andy Murray in Cincinnati before earning the bronze medal for Serbia in the single's event in Beijing. Roger Federer toppled Novak in the semi-final at the US Open and the Serb bounced back in Shanghai, closing the season with Masters Cup crown, his first in a career

2009 - For the third straight year, Novak was the third-best player in the world, earning 78 triumphs and playing in ten ATP finals. He lost the title matches in Miami, Monte Carlo, Rome and Cincinnati and conquered four smaller titles and Paris Masters, failing to reach a Grand Slam final or pass the round robin stage at the ATP Finals despite two wins

2010 - The season wasn't that great for the Serb, reaching four ATP finals and winning titles in Dubai and Beijing, losing the final at the US Open to Rafael Nadal. Novak was the quarter-finalist at all four Majors and led Serbia towards Davis Cup crown with seven singles wins from as many matches. The Serb did enough to finish the year inside the top-3 for the fourth time in a row and was ready to conquer the tennis world in the following season

2011 - Novak delivered one of greatest seasons in the Open era, claiming ten titles (defeated Nadal in six finals) from 11 finals and winning 70 out of 76 matches on the Tour. The Serb claimed three Grand Slam titles and five Masters 1000 crowns, becoming world no. 1 after Wimbledon and finishing there after leaving all the rivals behind. From 4-8 versus the top-10 opponents in 2010, Novak counted to a 21-4 score in 2011, becoming the first player with as many triumphs over the competitors from the elite group since Ivan Lendl in 1985. Djokovic conquered the first seven tournaments he entered (Australian Open, Dubai, Indian Wells, Miami, Belgrade, Madrid and Rome) and scored 41 straight wins at the beginning of the season before Roger Federer halted him in the semi-final at Roland Garros. By the end of the season, Novak went all the way at Wimbledon, Canada and the US Open, shutting down the engines after that but still producing a historical season that will take some beating

2012 - Novak counted to 75 wins in 2012, winning six titles from 11 finals and passing Roger Federer in the closing stages to finish at the top of the standings for the second straight year. As usual, Novak was at his best when it mattered the most, earning 58 Grand Slam and Masters 1000 victories and advancing at least into the semi-final in 15 out of 17 tournaments played. Djokovic defended the title in Melbourne, adding Miami, Canada, Beijing, Shanghai and the ATP Finals where he won all five matches to close the season in style

2013 - It was another great season for the Serb, achieving a 74-9 score and seven titles from nine finals. Despite winning the last 24 matches after the US Open, Novak finished second behind Rafael Nadal, securing the year-end top-3 spot for the seventh straight year. Once again, the Serb was the player to beat at Majors, wrapping up a 24-3 score, winning the third consecutive Australian Open title and losing the finals at Wimbledon and the US Open, together with the semi-final run at Roland Garros. Novak was the last man standing in Monte Carlo, Shanghai and Paris, defending the title at the ATP Finals and missing a chance to deliver another Davis Cup crown for Serbia despite two singles wins over the Czechs

2014 - For the third time in the last four years, Novak Djokovic was the leader of the ATP pack, delivering 61 wins and seven titles from eight finals. Wimbledon was Novak's seventh Grand Slam crown, passing Rafael Nadal at the top of the rankings and staying there until the end of the season, adding Indian Wells, Miami (moving ahead of Andre Agassi with 18 Masters 1000 crowns), Rome and Beijing to his collection. For the third year in a row, Novak conquered the ATP Finals crown when Roger Federer gave him a walkover in the final and the season could have been even better without the final loss at Roland Garros to Rafael Nadal and Kei Nishikori in the semi-final at the US Open

2015 - In his most successful season, Novak was the dominant figure in men's tennis with 15 ATP finals and 11 titles! The Serb grabbed 82 wins from 88 matches, leaving all the rivals behind him from January until November to add his name in history books and continue to chase Roger Federer and Rafael Nadal. Finishing as the year-end no. 1 for the fourth time in the last five years, Djokovic claimed three Grand Slam titles to improve his tally to ten, losing the final at Roland Garros to Stan Wawrinka in what could have been almost a perfect year had he won that one as well. Novak became the third player with all four Grand Slam finals in the season after Rod Laver and Roger Federer and lifted six Masters 1000 titles from eight finals, leaving Andy Murray and Roger Federer miles behind

2016 - What had been running away from Novak in the past years Novak finally achieved in 2016, winning the elusive Roland Garros crown to become the eighth man in history with all four Majors and the third who held them at the same time. Overall, the Serb won seven titles, six of those at Grand Slam or Masters 1000 level, and suffered losses in Rome, the US Open and the ATP Finals to hand the year-end no. 1 spot to Andy Murray despite a massive lead he had over the Briton after Paris

2017 - Novak kicked off the season with the title in Doha but he was far from the usual level starting from the Australian Open, struggling with an elbow injury and competing in only 40 matches before deciding to skip the rest of the year after Wimbledon, claiming only one small ATP title in Eastbourne and closing the year outside the top-10 for the first time since 2006

2018 - Novak had an incredible run since May after a slower start of the season and an elbow surgery he underwent in January, passing all the rivals to finish as the year-end no. 1  for the fifth time, also as the oldest player at 31. Djokovic dropped out from the top-20 for the first time in many years before returning to the top of his game, conquering Wimbledon, Cincinnati, US Open and Shanghai, losing finals at Queen's, Paris and the ATP Finals and earning enough points to pass Rafael Nadal and close the season on the ATP throne

In Novak Djokovic's words: 'Like Roger Federer, I can play aggressive and defensive'

'Novak Djokovic would have an advantage at Roland Garros', says former Top 10

Novak Djokovic: 'I will keep this gift in a special place in my home'

Novak Djokovic: It's a great battle, congrats to Borna Coric on a great performance

Borna Coric: 'Novak Djokovic is one of the greatest players of all time'

Novak Djokovic: 'What Roger Federer and Rafael Nadal are doing is epic'