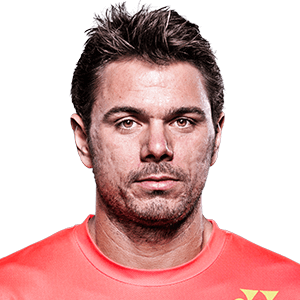 2003 - 2 ATP wins in Amersfoort and Umag, and he won back-to-back Challenger crowns in San Benedetto and Geneva to wrap up the season inside the Top 200

2004 - 0-7 on the ATP level but he won Barcelona and Geneva Challengers, also losing in the final at St. Petersburg to finish in the Top 200 for the second straight year

2005 - The first big season for the Swiss, scoring 16 ATP wins and cracking the Top 60. He reached his first ATP quarter-final in Barcelona and his first Masters 1000 win came in Rome 2 weeks later. He advanced to the third round at Roland Garros and the final of the home event in Gstaad, losing to Gaston Gaudio. In September, he scored 2 Davis Cup wins against Great Britain

2006 - 33 ATP wins for the place in the Top 30 at the end of the season, including his first ATP title in Umag. He also played in the semis in Auckland, Barcelona, and Basel and claimed 3 Top 10 wins

2007 - A knee injury and surgery sidelined him for 3 months and he managed to win just 21 matches, which was enough to close the year in the Top 40. His best result came in Stuttgart, losing to Rafael Nadal in the final, and he lost the title match in Vienna as well, this time to Novak Djokovic

2008 - A solid season that pushed him inside the Top 10 after 38 wins. He played in the final of Doha and Rome and he was also in the quarter-final of Indian Wells and semis in Barcelona, losing these matches to Murray, Djokovic, and Ferrer. Stan made the last 16 at Wimbledon and US Open, entering the Top 10 for the first time after that Rome final

2009 - Stan lost in the 4th round of both Indian Wells and Miami to Djokovic and Nadal, and Novak took him down in the semi-final of Monte Carlo as well. He won Lugano Challenger between Roland Garros and Wimbledon, and he pushed Andy Murray to 5 sets in the 4th round of the world's most prestigious event. The second part of the season was not that good, reaching quarter-finals in Tokyo and Basel, and he concluded the season just outside the Top 20

2010 - 36 ATP wins and an ATP title in Casablanca, good enough to finish the season ranked 21st for the second straight year. He also defended Challenger title in Lugano and entered his first Grand Slam quarter-final at the US Open, with just 6 wins in the rest of the season

2011 - Opened the season with a title in Chennai and he reached the last 8 at the Australian Open, losing to Roger Federer in straight sets. He won 17 out of his first 21 matches but he lost the ground after Indian Wells, winning just 18 matches in the last 15 tournaments he played, including the semi-final run in Basel where he lost to Federer again

2012 - Stan finished in the Top 20 for the third time but he was the only player in that group who failed to reach an ATP final, losing in the semis in Buenos Aires, Acapulco, Estoril, and Cincinnati, notching 35 wins in total

2013 - Swiss made a step forward, with 51 wins and a title in Oeiras. He was mister consistent, playing in 13 quarter-finals and in the semi-final of ATP Finals. David Ferrer beat him in the final of Buenos Aires and he lost to Rafael Nadal in Madrid title match and again in the quarter-final at Roland Garros. Also, Stan played in the final of s-Hertogenbosch, losing to Mahut, and he reached the last 4 at the US Open, beaten by Novak Djokovic in 5 tight sets. Serb also beat him in the semi-final of the ATP Finals, the first in Stan's career

2014 - Wawrinka may have won just 37 matches, but he knew how to dispose them. He opened the season with a title in Chennai and he grabbed his first Grand Slam title in Melbourne, as the oldest first-time winner since Ivanisevic at Wimbledon 2004, beating Djokovic and Nadal en route to his biggest title in a career so far. In addition, Stan lifted his first Masters 1000 trophy in Monte Carlo, defeating Roger Federer in the final, and he established his place in the Top 3 of the ATP rankings. He lost to Dimitrov in the semi-final of Queen's and in the quarter-final of Wimbledon to Federer, with a quarter-final run in Cincinnati and US Open. The rest of the season was not that good but he had a chance to reach the final at the ATP Finals, wasting 4 match points against Federer in the semis, dropping the deciding set in the tie break. A week later, Stan and Roger worked together to clinch the first Davis Cup title for Switzerland, beating France in Lille

2015 - Stan spent the entire season in the Top 10, claiming 55 ATP wins and 4 titles, including Roland Garros, his second Grand Slam crown. The start of the season was almost perfect, with 15 wins from 17 matches, and he won titles in Chennai and Rotterdam, losing in the semi-final of Australian Open to Djokovic in 5 sets. He lost in the semi-final of Rome to Federer but got his revenge at the Roland Garros, beating world number 2 in the quarter-final. In the title match, Wawrinka defeated Novak Djokovic in 3 hours and 12 minutes for his second Major, followed by a tight quarter-final loss to Gasquet at Wimbledon, by 11-9 in the 5th set. Federer was too strong in the US Open semi-final but Stan bounced back to win Tokyo and reach the semis in Shanghai. Just like 12 months ago, Federer halted him in the semi-final of the ATP Finals but overall it was a great season for Swiss

2016 - Another solid and consistent year, never leaving the Top 5 and winning his 3rd Grand Slam crown at the US Open, becoming the oldest winner in New York since Ken Rosewall in 1970, saving a match point against Daniel Evans in the third round! He defended his Chennai title once again and lost in the 4th round of the Australian Open to Raonic in 5 sets. Won the title in Dubai and in Geneva just before Roland Garros where he was defeated by Murray in the semi-final. He went all the way at the US Open, despite the fact he lost at least a set in the last 5 matches, toppling del Potro, Nishikori and Djokovic en route to his third different Slam in 3 years. He lost in the final of St. Petersburg to Zverev and the rest of the season was not that good, but he did enough to keep himself in the Top 4

2017 - A knee injury forced Stan to miss the second part of the season after Wimbledon, but he managed to stay in the Top 10 before the start of 2018 season. He lost in the semi-final in Brisbane and in Melbourne, beaten by Federer in 5 sets, and his compatriot overpowered him in the final of Indian Wells as well. Stan defended his Geneva crown before losing in the final of Roland Garros to Nadal, 2 days after edging Andy Murray in 4 hours and 34 minutes. He dropped the first round encounters at both Queen's and Wimbledon and decided to take a surgery in August, having to skip the rest of the year

Stan Wawrinka: Don't compare me to Andy Murray, he has had more success

Benoit Paire: If I played doubles with Roger Federer, even I would have won a medal

Paire: 'If I played with Roger Federer, I would have also got the gold medal'

Stan Wawrinka: I plan to resume training in June

Stan Wawrinka explains why is skeptical regarding US Open this year