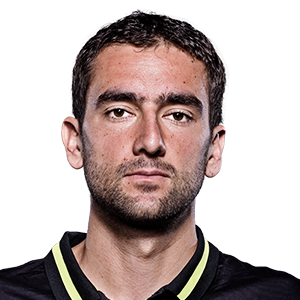 2004 - Tall Croat played his first professional match at Croatia F1 Futures in Zagreb at the age of 15, winning one match

2005 - Marin claimed his first Futures title in Croatia F3 Futures and his ATP debut came at home in Umag, losing in the first round to Kristof Vliegen. First Challenger win in Geneva and he finished the season inside the Top 600

2006 - Cilic made his Davis Cup debut in February against Austria and he won Futures title in the following week, losing in another final 7 days later. In July, he advanced to the semi-final in Gstaad, ranked 316th, losing to Feliciano Lopez in 3 tight sets and that helped him to finish the year at 170th place, despite losing the last 7 matches he played

2007 - 14 ATP wins and 16 on Challenger Tour, enough to enter the Top 100 and finish the season as the second-youngest player in that group. 2 Challenger titles on clay and a quarter-final run at Queen's, losing to Andy Roddick in straight sets. He qualified for the main draw in St. Petersburg and beat world number 4 Nikolay Davydenko en route to the semi-final, which pushed him inside the Top 100

2008 - Marin improved his game a lot to notch 37 ATP wins and his first ATP title in New Haven, ending the year inside the Top 25. After good runs in Chennai and Melbourne, Cilic slowed down a little bit in the next couple of months before reaching the last 4 in Nottingham and the 4th round at Wimbledon. Gilles Simon stopped him in the quarter-final in Toronto and that first ATP crown came just before the US Open, beating Mardy Fish in the title match. He won 6 ATP matches by the end of the season and that was enough to finish on the 23rd position in the rankings

2009 - 48 ATP wins and titles in Chennai and Zagreb, good enough for the place in the Top 15. Marin grabbed 15 wins in the first 16 matches he played on the Tour and he competed in the 4th round of Roland Garros and in the quarters at the US Open, beating Andy Murray in straight sets before losing to del Potro. One of the biggest wins in his career so far came in Beijing where he ousted world number 2 Rafael Nadal and he had a good run in the final 3 indoor events of the season, with a final in Vienna and quarter-final in Basel and Paris

2010 - Marin cracked the Top 10 for the first time in his career after the semi-final run at the Australian Open, and just like in the previous season he was one of the best players in the opening 2 months, defending titles in Chennai and Zagreb. He dropped the Munich final to Mikhail Youzhny and also reached the semi-final in Washington but he was not on the same level from the opening few events of the season, collecting 40 ATP wins and just 25 after the first week of February

2011 - A similar season to the previous one, with 44 wins and 22 defeats and an ATP title in St. Petersburg, which wasn't enough to keep him in the Top 20 when the season ended. It could have been better if he had managed to be victorious in at least one more final, falling short on the last step in Marseille, Umag, and Beijing

2012 - Marin was forced to miss the opening 2 months of the season with a knee injury but he won 39 matches overall and titles at Queen's and in Umag. At Wimbledon, Marin beat Sam Querrey by 17-15 in the final set after 5 hours and 30 minutes, losing to Andy Murray in the next round, and he reached the semi-final in Hamburg after conquering the home event in Umag. Novak Djokovic defeated him in the quarter-final of Cincinnati, Andy Murray did the same at the US Open, and he was also in the last 8 in Shanghai, losing to Roger Federer

2013 - Only 38 matches on the Tour after serving a 4-month suspension for a violation of the tennis anti-doping programme, playing just 1 tournament after Wimbledon. He won the title in Zagreb, followed by the quarter-final run in Miami and a title match at Queen's, losing to Andy Murray after 2 and a half hours

2014 - Marin was ready to compete on a high level again and this was his best season so far, with 54 wins, 4 ATP titles and a Top 10 finish. He won 14 out of 15 matches in February, lifting trophies in Zagreb and Delray Beach (losing in Rotterdam to Berdych), and he had a great run at Wimbledon as well, beaten by Novak Djokovic in 5 sets in the quarter-final. He saved his best tennis for the US Open, ousting Tomas Berdych, Roger Federer, and Kei Nishikori in straight sets to grab his first Grand Slam title, as the first player ranked outside the Top 10 since Pete Sampras in 2002. Marin claimed the title in Moscow and had a chance to compete at the ATP Finals, losing all 3 round robin matches

2015 - Right shoulder injury kept him out from the court until March and he won 35 matches with 1 ATP title, defending his Moscow crown from 12 months ago. Novak Djokovic defeated him in the quarter-final of Wimbledon for the second year in a row and also in the semi-final of the US Open, crashing Marin's hopes of title defense. He reached the quarter-final in 4 out of last 6 events he played, losing to players like Nishikori, Wawrinka, Nadal, and Dimitrov

2016 - First Masters 1000 title in Cincinnati and first ATP 500 crown in Basel, collecting enough points to finish the season ranked 6th, with a 49-24 score. Nick Kyrgios overpowered him in Marseille final and he lost to David Goffin in Indian Wells quarters and in the final of Geneva to Wawrinka. Andy Murray stood between Cilic and Queen's final and he reached third Wimbledon quarter-final in a row, squandering a huge lead and 3 match points against Roger Federer. Cincinnati was his biggest success after winning US Open 2 years earlier, beating Grigor Dimitrov and Andy Murray in the last 2 matches, and we saw him in the semi-final in both Tokyo and Paris. In between, Marin managed to seize the crown in Basel, and he had a chance to win Davis Cup with Croatia, losing to Argentina in a very entertaining tie

2017 - Just like in the previous season, Cilic was ranked 6th in the year-end rankings, reaching his second Grand Slam final at Wimbledon. He won the title in Istanbul to soften a slow start of the year and he played well at Roland Garros as well, losing to Stan Wawrinka in the last 8. Feliciano Lopez prevailed in Queen's final, despite the fact Marin had a match point, and that was a nice boost before Wimbledon, where Roger Federer scored a commanding win to left Marin empty-handed. He was halted in the semi-final in Tokyo, Shanghai, and Basel, missing a chance to fight for more ATP titles, and he also lost all 3 matches at ATP Finals, winning a set in all of them

Marin Cilic on what could lead to tennis growing as sport

Marin Cilic reveals what he felt moments after becoming a father

Marin Cilic reveals how he is coping with clay season cancellation