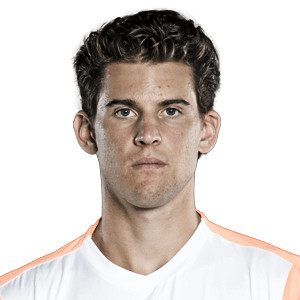 2010 - Thiem made the first appearance on the pro scene in Kitzbuhel Challenger, winning one match, and he also grabbed his first Futures win 2 weeks later, in Austria as well

2011 - First match on the ATP level at home in Kitzbuhel and first ATP win against Thomas Muster in Vienna. He reached the final of
Turkey F31 Futures in November and finished the season inside the Top 650

2012 - 3 Futures titles on clay and another ATP win in Vienna, ousting Lukas Lacko before falling to Marinko Matosevic. Challenger quarter-final in Rennes as a qualifier, finishing the season just outside the Top 300

2013 - Second best U20 player of the year behind Jiri Vesely, ending the season in the Top 150. 2 Challenger titles in Morocco and 2 Futures crowns from 5 finals. Also, Dominic reached his first ATP quarter-final in Kitzbuhel and another one in Vienna, losing to Jo-Wilfried Tsonga in the third set tie break

2014 - A breakthrough season that propelled him inside the Top 50, backed by 22 ATP wins. Thiem advanced to his first ATP final in Kitzbuhel, losing to David Goffin, and he reached the 4th round at the US Open with the 3rd round appearance in Indian Wells, Barcelona and Madrid, all as a qualifier

2015 - Dominic improved his rankings for the 5th straight year, finishing as the youngest player in the Top 20. He posted 36 ATP wins and won titles in Nice, Umag, and Gstaad, with semi-final runs in Kitzbuhel and St. Petersburg. He scored 4 wins in Miami en route to his first Masters 1000 quarter-final and also 2 triumphs in Rome before losing to Stan Wawrinka

2016 - Young Austrian pulled his game together to notch 58 ATP wins and 4 titles, cracking the Top 10 for the first time and closing the season ranked 8th, competing at the ATP Finals. He prevailed against Rafael Nadal and Nicolas Almagro in Buenos Aires to lift his first trophy of the season, and he conquered Acapulco as well, toppling Bernard Tomic in the final. Domini defended his title in Nice and he reached his first Grand Slam semi-final at Roland Garros before losing to Novak Djokovic. A week later, Thiem saved 2 match points against Roger Federer in the semi-final of Stuttgart to defeat Philipp Kohlschreiber in the title match, and he performed well at the US Open as well, advancing to the last 16. In London, Thiem claimed his first win at the ATP Finals against Gael Monfils but he failed to pass the round robin stage, losing to Djokovic and Raonic

2017 - Dominic spent the entire season in the Top 10 and he achieved a career-high ranking in November when he was 4th. He earned 49 ATP wins with a single title in Rio de Janeiro and he lost in the final of Barcelona and Madrid to Nadal. Thiem beat the Spaniard in Rome and they met again in the semis at Roland Garros (took down Djokovic in the quarters), when Nadal lost just 7 games. In addition, he was the only player together with Nadal who competed in the 4th round of all 4 Slams but he struggled to keep the pace with other players from the top on the hard court, winning just 21 out of 40 matches he competed

Dominic Thiem tests negative for coronavirus after returning to Austria

Dominic Thiem: My first time in Serbia and it was a perfect weekend

Dominic Thiem: Novak Djokovic is the king of Serbia