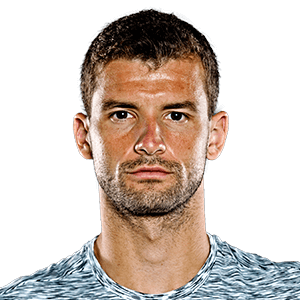 2008 - Junior Wimbledon and US Open champion. 3 Futures titles in Spain and an ATP debut in s-Hertogenbosch in June. Dimitrov also played his first Challenger matches and he finished the season inside the Top 500

2009 - Another good season, cracking the Top 300 and winning his first ATP match in Rotterdam, beating Tomas Berdych before losing to Rafael Nadal in 3 sets. 4 ATP wins in total and a Grand Slam debut at Wimbledon, with 3 Challenger quarter-finals, every time as a qualifier

2010 - 3 Futures titles and 3 back-to-back Challengers crowns in Geneva and Bangkok, wrapping up the season just outside the Top 100

2011 - 18 ATP wins, including the first at Slams, and 3 quarter-final appearances in Munich, Eastbourne, Bangkok, and Stockholm. Challenger title in Cherbourg and a place inside the Top 100 at the end of the season, the third youngest player in that group after Tomic and Harrison

2012 - Grigor continued to make a nice progress through the rankings, finishing inside the Top 50 after 3 ATP semi-final results at Queen's, Bastad and Gstaad. He also reached the 4th round of Miami and the quarter-final in Basel, playing just 1 Challenger in the entire season

2013 - Breakthrough season with 37 ATP wins and the first ATP title in Stockholm, toppling world number 3 David Ferrer in the title match. His first ATP final came at the start of the year in Brisbane, losing to Andy Murray, and he competed in the semi-final in Rotterdam and in the quarters in Monte Carlo, his first in Masters 1000 events. Bastad, Washington, and Basel also brought solid results and a lot of points and he concluded the season inside the Top 25

2014 - For the 7th season in a row Grigor improved his year-end ranking, finishing just outside the Top 10 after an impressive 50 ATP wins and 3 ATP titles. Dimitrov played in the quarter-final of Australian Open, losing to Rafael Nadal, and he edged Gulbis, Anderson, and Murray to conquer Acapulco. He went all the way in Bucharest and Queen's as well, and we saw him in the semi-final of Wimbledon, losing to Novak Djokovic and entering the Top 10 for the first time next Monday

2015 - He couldn't keep the same pace from the last season, notching 33 ATP wins and finishing inside the Top 30. He played in 2 Masters 1000 quarter-finals on clay, with the semi-final appearances in Brisbane and Istanbul

2016 - Dimitrov failed to win a title for the second season in a row, losing to Viktor Troicki in Sydney after wasting a match point. Also, he had a chance to win the trophy in Istanbul, leading 7-6 5-2 against Diego Schwartzman before the Argentine turned the scoreboard around to oust the Bulgarian and steal the crown. The second part of the season was solid, with a semi-final show in Cincinnati, Chengdu, and Stockholm, with another final defeat, this time to Andy Murray in Beijing

2017 - 49-19 score on the Tour and the best season of his career so far! Grigor was one of the hottest players of the first part of the season, winning titles in Brisbane and Sofia and losing in an epic semi-final of Australian Open to Rafael Nadal. The spring run was not that good but Grigor quickly forgot about that, conquering Masters 1000 event in Cincinnati after holding serve in 52 out of 53 games to clinch his biggest title. Rafael Nadal beat him in Beijing and Shanghai, also dropping the Stockholm final to del Potro, but he saved his best tennis for the ATP Finals, becoming the first debutant who won the title since Alex Corretja in 1998. Grigor scored 8 Top 10 wins and he finished the season ranked 3rd, only behind Nadal and Federer

Grigor Dimitrov: Clearly, Novak Djokovic is the best player out there