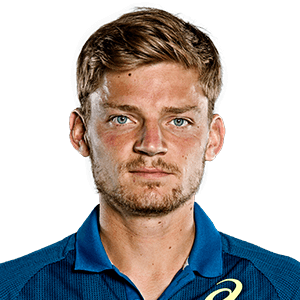 2009 - 9 wins on Challenger Tour, including the semi-final run in Todi as a qualifier. 6 semi-finals in Futures, advancing to 1 final, and he came close to Top 300 by the end of the season

2010 - Spent the entire season on the Futures circuit, winning 3 titles from 6 finals and he improved his ranking by 100 positions in comparison to last season

2011 - Goffin made his ATP debut in Chennai as a qualifier, beating Somdev Devvarman in the first round before losing to Stan Wawrinka, and he reached his first Challenger semis at home in Mons. Won back-to-back indoor Futures in France in October

2012 - A breakthrough season with 17 ATP wins and a place in the Top 50 for the first time. ATP quarter-final in Chennai and the first Masters 1000 win in Miami before claiming maiden Challenger crown in Le Gosier. David advanced to the 4th round at Roland Garros, as the first lucky loser at Majors since 1995, losing to Roger Federer in 4 sets. By the end of the season, Goffin played in the last 8 in Winston-Salem and Valencia, and he also won strong Challenger in Orleans

2013 - David had to get down to the Challenger Tour after poor results in the first part of the season, lifting the title in Eskisehir, and he broke his left wrist while training for Davis Cup tie versus Israel, missing the rest of the season after the US Open and dropping out from the Top 100

2014 - His comeback was not that impressive, entering July with 3 ATP wins, but everything changed after 4 amazing weeks he had, winning back-to-back Challengers in Scheveningen, Poznan, and Tampere, and his first ATP title in Kitzbuhel, beating Dominic Thiem in the title match. Indoor events in the last part of the season suited him well too, conquering Metz and Mons, with a final run in Basel as well, losing to Roger Federer in straight sets to finish the season just outside the Top 20 and earn ATP Comeback Player of the Year award

2015 - David claimed 38 ATP wins and finished the season in the Top 20 for the first time. He lost all 10 matches versus Top 10 rivals but had some solid results that gave him a good ranking position at the end of the season. He played in his first Masters 1000 quarter-final in Rome and in the final of s-Hertogenbosch, also reaching the last 16 at Wimbledon. Belgian had another chance to claim an ATP title but Thiem beat him in the final of Gstaad, and he advanced to the last 8 in Basel, losing to Federer in 3 sets. Led Belgium to their first Davis Cup final since 1904, losing to Great Britain

2016 - Career-high 49 ATP wins and the entire season spent in the Top 20. Lost in the final of Tokyo and advanced to his first Grand Slam quarter-final at Roland Garros. In addition, David played in back-to-back Masters 1000 semi-finals in Indian Wells and Miami, losing to Raonic and Djokovic. Canadian beat him in 5 sets at Wimbledon and he also had a chance to make an ATP Finals debut, replacing Gael Monfils to play a match against Djokovic

2017 - The season behind us was the best in David's career, earning 59 ATP wins and 2 titles, lifting an ATP trophy after 3 years. He lost to Dimitrov in Melbourne and Sofia, and in another final in Rotterdam versus Tsonga. Nadal halted him in Monte Carlo and Madrid and he had to retire against Zeballos at Roland Garros, missing the entire grass season. He couldn't compete on his usual level in the next couple of months but his season became much better after back-to-back titles in Shenzhen and Tokyo. David managed to defeat Rafael Nadal and Roger Federer en route to the ATP Finals title match, becoming the 6th player who toppled Rafa and Roger in the same tournament, and he finished the season ranked 7th thanks to these 800 points he earned in London

Richard Gasquet: I think eventually all players would come to play US Open

Henin: Latest injury is not a good sign for Roger Federer but...

David Goffin: It is difficult to regain motivation without a start date