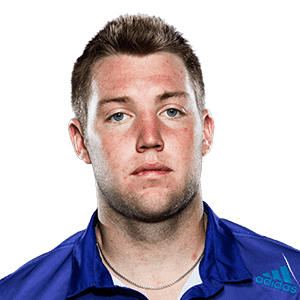 2009 - Jack made a pro debut at USA F7 Futures and he won the 5th event he entered, going all the way at USA F29 Futures to lift his first pro title at the age of 17, finishing inside the Top 600

2010 - He competed in 10 Futures events, reaching 3 quarter-finals, and he had a chance to make an ATP debut at the US Open after becoming a national U18 champion at Kalamazoo, losing to Marco Chiudinelli in the opening round but winning the junior event a week later

2011 - 2 quarter-finals on Challenger level and a Masters 1000 debut in Miami. His first ATP win came at the US Open, toppling Marc Gicquel before losing to Andy Roddick, and he finished the year inside the Top 400

2012 - Opened the season with a Futures title at home in the USA but he had to miss 4 months of the season due to injury, returning in July. He made his first ATP quarter-final in Atlanta, followed by the third round appearance at the US Open. His first Challenger title came in Tiburon and he reached the final in Champaign as well, finishing the year ranked 150th, as the 4th best U20 player

2013 - 10 ATP wins and the year-end ranking just outside the Top 100. Sock played in the quarter-final of Memphis and he won Winnetka Challenger, with another semi-final in Kaohsiung. He advanced to the last 32 in New York for the second year in a row, losing to Janko Tipsarevic

2014 - A breakthrough season with 27 ATP wins and the place in the Top 50. He was consistent through the most of the season, advancing to 5 ATP quarter-finals, with back-to-back semi-final runs at Newport and Atlanta in July, getting beaten by Lleyton Hewitt and John Isner

2015 - The 5th consecutive season with an improved ranking, backed by 35 ATP wins despite he started his season only in Indian Wells. He reached the 4th round there and lifted his first ATP title in Houston, prevailing against Sam Querrey in the title match. The first last 16 appearance at Grand Slams came at Roland Garros, losing to Rafael Nadal, and he repeated his semi-final run in Newport. Jack reached the quarter-final in Washington and Beijing and he concluded season in a strong way, losing in Stockholm final to Berdych and in Basel semis to Federer

2016 - Jack pushed his limits again, notching 37 wins and finishing the season inside the Top 25. He was the beaten finalist in Auckland, Houston, and Stockholm and he scored 8 Grand Slam wins, reaching the last 16 at the US Open. In addition, he had solid results in Shanghai and Paris, playing in Masters 1000 quarter-final for the first and second time

2017 - It was a wild run from Jack in the last couple of months and he propelled his ranking position from 22nd to 9th in just a week, winning his maiden Masters 1000 crown in Paris. He also conquered Auckland and Delray Beach, for his by far the best season so far in a career. With that Paris title, Jack also punched the ticket for the ATP Finals where he reached the semi-final, losing to Grigor Dimitrov in 3 sets. Jack became the lowest-ranked Masters 1000 winner since Ivan Ljubicic in Indian Wells 2010, and also the first non-European player who grabbed big men's tennis title since Andy Roddick in Miami 2010. After winning Auckland and Delray Beach (Raonic gave him a walkover in the final), Sock reached the semi-final in Indian Wells, the quarter-final in Miami and the semi-final in Houston. Kevin Anderson stopped him in the semis in Washington and he won only 4 out of the next 11 matches he played before Paris, changing his fortune in the city of light to enter Top 10 for the first time

Taylor Fritz: Nick Kyrgios and Jack Sock are among the better gamers on tour

Jack Sock and fiance announce their wedding party on Instagram