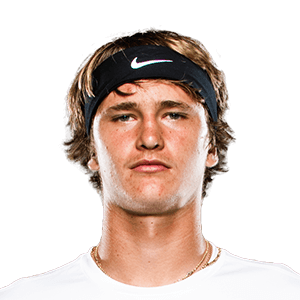 2012 - Alexander played his first pro match at Germany F14 Futures and he reached the final in the season-ending USA F32 Futures as one of the youngest players ever. Also, he was by far the youngest player in the year-end Top 1000 at the age of 15 years and 8 months

2013 - The first player born in 1997 who played an ATP tournament, making a debut in Hamburg, and he also had a chance to play on the Challenger Tour a month later in Meerbusch. Semi-final run at USA F28 Futures and another season with a Top 1000 finish, the third youngest player in that group behind Duck Hee Lee and Andrey Rublev

2015 - The only player born in 1997 in the year-end Top 100 rankings after 14 ATP wins. Sascha scored his first Masters 1000 triumph in Miami and first Grand Slam win at Wimbledon, also winning Heilbronn Challenger in May. He played well in Bastad and Washington as well, reaching the semis and the quarters, and he qualified for the US Open main draw, losing to compatriot Philipp Kohlschreiber in 5 sets

2016 - The first big season on the Tour, winning 44 matches and claiming first ATP title in St. Petersburg, becoming the first teenager with ATP crown since Marin Cilic in New Haven in 2008 and finishing the season in the Top 25. After winning 3 matches at Indian Wells (losing to Nadal despite a match point), Zverev advanced to the semi-final in Munich and the final in Nice, his first on the Tour. In Halle, Sascha became the youngest player who beat Roger Federer since Rafael Nadal in 2005, en route to his second final, and he also reached the 3rd round at Wimbledon. Sascha was halted in the semis in Washington and Stockholm, but he went all the way in Russia, beating Tomas Berdych and Stan Wawrinka en route to his maiden ATP crown. Zverev was the youngest player in the Top 20 since Novak Djokovic in 2006

2017 - An amazing season highlighted by 55 ATP wins and 5 ATP titles, including 2 Masters 1000 crowns in Rome and Montreal, and he finished the year ranked 4th. Zverev was the youngest player with Masters 1000 title since Djokovic in 2007 and also the youngest player in the Top 3 since Serb did it 10 years ago. Sascha claimed titles in Montpellier and Munich before conquering Rome, beating Novak in the final in straight sets. Federer stopped him in the final of Halle and he lost to Raonic in 5 sets at Wimbledon. Young German shined in Washington and Montreal and he was the youngest competitor at ATP Finals since Juan Martin del Potro in 2008

Rafael Nadal recalls: 'I stood eight meters behind to return his serves'

Novak Djokovic: Alexander Zverev will play in Zadar if he doesn't have to quarantine