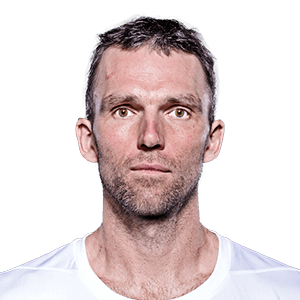 1999 - Another Futures final in Germany, first Challenger win in Lucknow on grass

2002 - ATP debut in Chennai, 1 Futures title and a Challenger final in Andorra

2003 - Grand Slam debut at Wimbledon, beating the defending champion Lleyton Hewitt in 4 sets en route to the 3rd round. Back-to-back Challenger titles in Binghamton and Bronx followed by the third round at the US Open and the quarter-final in Shanghai, finishing the season inside the Top 100

2004 - 18 ATP finals and Challenger title in Calabasas, spending the entire season in the Top 100. Ivo reached the 4th round at Wimbledon, halted by Roger Federer, and he advanced to the last 8 in St. Petersburg

2005 - 17 ATP wins and another season inside the elite Top 100. Won just 3 matches before June and then he reached Surbiton Challenger final and another one at Queen's, his first on the ATP Tour, losing to Andy Roddick in 2 tie breaks. Andy beat him in the quarter-final of Washington as well but Karlovic took revenge in Madrid Masters before losing to David Nalbandian

2006 - Another solid season with 17 wins, good enough in the Top 100. Played in the semi-final in Las Vegas and in the quarters of Zagreb, Barcelona, and Munich, having to end his season in September due to knee injury

2007 - A breakthrough year with 43 wins and the Top 25 finish, including 3 ATP titles in Houston, Nottingham, and Stockholm. He was the only player with Roger Federer to win titles on clay, hard and grass, and he lost to Swiss in Montreal, Basel, and Paris

2008 - Karlovic cracked the Top 20 after 31 ATP wins and a title in Nottingham. Played in the semi-final of Rotterdam and in Cincinnati, after beating Roger Federer in the third set tie break before falling to Andy Murray. Quarter-final run in Paris Masters

2010 - Only 9 tournaments played, being forced to end his season in May with an Achilles injury. Final in Delray Beach, quarter-final in Doha, Zagreb, and Memphis, with a 4th round appearance at the Australian Open as well, losing to Nadal in 4 sets

2011 - He fell out from the Top 100 but returned in time to finish the season ranked 56th. Quarter-final in Indian Wells, losing to Nadal in the final set tie break and the semi-final in Houston as a qualifier. Back-to-back Challenger titles in Sacramento and Tiburon

2012 - Right foot injury kept him away from the court for 2 months but he managed to wrap up the season in the Top 100, scoring 16 ATP wins and reaching the semi-final in Moscow

2013 - 5th ATP title in Bogota and another semi-final in Moscow, finishing in the Top 80

2014 - Rock solid season that pushed him into the Top 30 after 36 ATP wins. Lost in the final of Memphis, Dusseldorf, Newport, and Bogota and in the semi-final of Basel to Roger Federer

2015 - An even better season than the last one, with 38 wins, ATP title in Delray Beach (the oldest winner on the Tour after Jimmy Connors in 1989) and the place in the Top 25. Lost in the semis in Doha, Halle, and Bogota, played in the 4th round of Wimbledon and lost the final in Newport to Rajeev Ram

2016 - Ivo continued to push the limits and he finished the year inside the Top 20, as the oldest player since Ken Rosewall in 1978. 32 ATP wins and titles in Newport (saved 3 match points vs Muller) and Los Cabos, becoming the oldest champion since Marty Riessen at 1979 Lafayette. He also played in the final of Washington, wasting a match point against Gael Monfils

2017 - 3rd round appearance at the Australian Open, as the oldest player in the last 32 at Majors since Connors in 1991. Gilles Muller beat him in the final of s-Hertogenbosch, in the oldest ATP final since 1977, and he scored 15 wins in total to remain in the Top 100

Ivo Karlovic: Either way I’m okay with continuing or not. I’m set up good either way