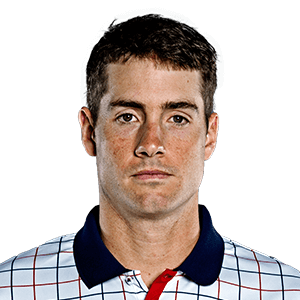 2003 - John made professional debut at USA F9 Futures before heading to the University of Georgia, playing for the Bulldogs between 2004-2007

2007 - First Futures title at USA F14 Futures followed by an ATP debut in Newport. First Challenger crown in Lexington and an ATP final in Washington, losing to Andy Roddick. Third round loss to Roger Federer on his Grand Slam debut at the US Open and 14 Challenger wins by the end of the season to finish just outside the Top 100

2009 - 27 ATP wins that pushed him inside the Top 40 despite a mononucleosis that kept him away from the court for 40 days. Isner played in the fourth round of Indian Wells and the US Open and also in the semi-final of Indianapolis and Washington. He won Tallahassee Challenger, toppling Donald Young in the final

2010 - Another great season with 38 wins and the place in the Top 20. John became the fifth player who hit 1000 aces in a season since 1991 and he won the longest match of all time against Nicolas Mahut at Wimbledon, prevailing 70-68 in the fifth set after three days and 11 hours and five minutes spent on the court! His first ATP title came in Auckland and he also played in the fourth round of the Australian Open and final of Memphis, winning 12 of the opening 14 matches of the season. Sam Querrey defeated John in the final of Belgrade and Mardy Fish halted him in the final of Atlanta, playing another good tournament in Beijing where Novak Djokovic beat him in the semis

2011 - 36 wins on the Tour, enough for the second season inside the Top 20. John conquered Newport without losing a set (got broken once in 54 service games) and he was in the final of Atlanta again, finishing second behind Mardy Fish. After reaching the semi-final in Washington Isner won another ATP title at Winston-Salem, followed by the quarter-final run at the US Open. In his last tournament of the season, John reached the semi-final at Paris Masters, losing to Jo-Wilfried Tsonga in the deciding tie break

2012 - John grabbed 45 ATP wins to become the top-ranked American for the first time, finishing in the Top 20 for the third straight year and entering the Top 10. He played in the quarter-final of Memphis, the semi-final of Delray Beach and in the final of Masters 1000 event at Indian Wells, losing to Roger Federer. Juan Monaco beat him in the final of Houston but Isner bounced back in Newport where he defeated Lleyton Hewitt in the title match. Roger Federer overpowered him in the quarter-final of the Olympic Games at Wimbledon and he reached the semi-final of Toronto Masters before winning the title at Winston Salem

2013 - 39 ATP wins and two titles on home soil in Houston and Atlanta, closing the season in the Top 20 for the fourth time in a row. Juan Martin del Potro prevailed over Isner in the final of Washington and John advanced to another Masters 1000 final in Cincinnati, losing to Rafael Nadal in two tie breaks

2014 - A similar season to the last win, repeating 39 wins and two ATP titles to earn his place in the Top 20 for half a decade now. John opened the season with a title in Auckland and he also played in the semi-final of Delray Beach and Indian Wells. Soldi runs at Roland Garros and Wimbledon before winning the title in Atlanta

2015 - John claimed 45 ATP wins to end the season on the 11th place, his best result in a career, and also in the Top 20 for the sixth straight season. Novak Djokovic beat him in the semi-final of Miami and he gained the form again during the North American summer swing, winning Atlanta and playing in the final of Washington and quarters in Canada. Roger Federer ousted him in the fourth round of the US Open in three close sets but the American finally beat the Swiss in the season finale in Paris before losing in the quarters against David Ferrer

2016 - With 33 ATP wins, John did enough to finish in the Top 20 once again after reaching the fourth round of the Australian Open and Indian Wells, backed by the semi-final in Houston and the last 16 run at Roland Garros. Nick Kyrgios stole Atlanta crown away from him after a two tie-break final and he was at the top of his game in Paris again, losing in the final to Andy Murray after a very close match

2017 - It was another great season for the American, his eight in the Top 20 after 38 wins. John hasn't lost his serve in back-to-back titles in Newport and Atlanta and he also played well on clay, reaching the semi-final of Rome Masters, losing to Alexander Zverev in three sets. Grigor Dimitrov ousted him in the semi-final of Cincinnati in two tie breaks and he finished the season with another deep run in Paris Masters, losing in the semis against Filip Krajinovic

'Thrilled' John Isner happy about US Open news: Time to get back on court

Jack Sock and fiance announce their wedding party on Instagram

Coco Gauff: "John Isner is a bigger inspiration than me"