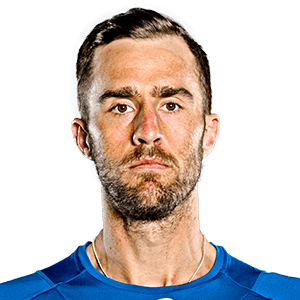 2012 - After a successful college career at USC, Steve Johnson decided to turn professional.

The American's first ATP win came at the Atlanta Open after beating fellow compatriot Donald Young in the first round.

The 29-year-old's first Grand Slam win and first Challenger title also came on the home soil as the American made the US Open third round and won the Aptos Challenger respectively.

2013 - Johnson debuted at the remaining three Grand Slams but failed to win a match as he picked up first round losses at the Australian Open, French Open and Wimbledon respectively.

The American entered the top-100 for the first time in his career.

2014 - Johnson earned his maiden French Open win after overturning a two-set deficit against French Laurent Lokoli in the first round.

The 29-year-old broke into the top-50 for the first time in his career and finished the season ranked inside the top-40.

2015 - Johnson collected his first wins at the Australian Open and Wimbledon respectively.

The American also made his maiden ATP final as he ended runner-up to David Ferrer in the Vienna final.

2016 - Johnson won his maiden ATP title on the grass of Nottingham after beating Pablo Cuevas in the final.

Johnson then made his Olympics debut as he represented the United States at the 2016 Rio Olympics.

Johnson made the quarter-final in the Rio singles event, while he and Jack Sock won the bronze medal in the doubles event.

Also, Johnson won his maiden doubles title as he and fellow compatriot Sam Querrey made it all the way in Geneva.

Johnson also made his top-30 debut.

Johnson also fell just short of winning his second doubles title as he and fellow compatriot were beaten in the Memphis doubles final.

2018 - Johnson successfully defended his Houston title but fell just short of winning it all in Winston-Salem as he ended runner-up to Daniil Medvedev in the final.