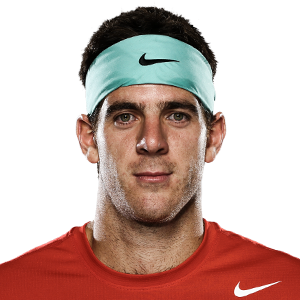 2005 - A breakthrough season with almost 1000 placed in the rankings gained. Three Futures titles from four finals and the semi-final on Challenger debut in Reggio Emilia. The first Challenger final in Campos Do Jordao before winning the first title at this level in Montevideo, finishing the season just outside the Top 150

2006 - First ATP win in Vina Del Mar, one of 10 that season, and a Grand Slam debut at Roland Garros. ATP quarter-finals in Umag and Basel and Challenger crown in Aguascalientes, good enough for the place in the Top 100

2007 - 28 ATP wins, including the semi-final in Adelaide, and cracking the Top 50. Juan Martin reached the last 16 in Miami, Cincinnati and Madrid, playing in the third round of the US Open where he lost to Novak Djokovic

2008 - The best season of his career up to that point and the first that earned him a place in the Top 10 after 46 wins. He missed the action between the Australian Open and Miami and was on a roll since July, winning Stuttgart, Kitzbuhel, Los Angeles and Washington for a 23-match winning streak before losing to Andy Murray in the quarter-final of the US Open. He had a chance to play at the Masters Cup for the first time, scoring one win and two defeats

2009 - 54 wins on the Tour and the entire season spent inside the Top 10! Del Potro kicked off the season with a title in Auckland and he also reached the quarter-final of the Australian Open, losing to Federer in straight sets. He played well in Masters 1000 series too, with 12 wins up to Madrid, and he had a chance to play in his first Grand Slam final, losing in the semis of the Roland Garros to Federer in five sets. The Argentinian was the player to beat during the summer, lifting the title in Washington and losing the Montreal final to Murray before conquering the US Open, beating Rafael Nadal and Roger Federer in back-to-back matches to embrace tennis glory at the age of 20! In November, Juan Martin played in the final of the Masters Cup, losing to Nikolay Davydenko

2010 - A right wrist injury had kept him off the court for an almost entire season, missing all the action between the Australian Open and Bangkok and playing just three tournaments to finish the season ranked outside the Top 250

2011 - Juan Martin made a successful return, finishing the season just outside the Top 10 and earning an ATP Comeback Player of Year award. He won 48 matches and titles at Delray Beach and Estoril, with another final in Vienna

2012 - Career-high 65 wins with four ATP titles in Marseille, Estoril, Vienna and Basel. He lost to Federer in the quarter-final of the Australian Open and the final of Rotterdam, suffering another loss to Swiss in the semi-final of Dubai. Juan Martin couldn't solve the riddle named Roger Federer, falling against his great rival in the quarter-final of the Roland Garros and in the semi-final at London Olympics after four hours and 26 minutes before winning the bronze medal against Novak Djokovic. The Serb stopped him in Cincinnati, US Open and Masters Cup but he finally defeated Roger in the final of his hometown of Basel for the place in the Top 10 at the end of the season

2013 - 51 ATP wins and the entire season spent in the Top 10. He ruled the ATP 500 series, winning four titles in Rotterdam, Washington, Tokyo and Basel. Rafael Nadal beat him in the final of Indian Wells and Novak halted him in the semi-final of Wimbledon after almost five hours of epic battle. The Serb prevailed in the final of Shanghai as well and he suffered losses against Novak and Roger at Masters Cup

2014 - A left wrist injury had kept Juan Martin away from the action since Dubai, being forced to miss the rest of the year and finishing the season outside the Top 130 after scoring just seven wins, including a title in Sydney

2015 - Another tough season for the Argentinian, struggling with wrist injuries that forced two surgeries and splitting with a longtime coach Franco Davin. He played just four matches in Sydney and Miami and he barely stayed inside the Top 600 at the end of the season

2016 - Juan Martin made a nice comeback, winning 32 matches and claiming the title in Stockholm, his first in almost three years, and he closed the season in the Top 40. A left wrist injury forced him to skip Rome and Roland Garros but the rest of the season was fine, beating Djokovic (the lowest-ranked player who beat Novak since Belgrade 2010) and Nadal at Rio de Janeiro before losing in the Gold medal match to Murray. He played in the quarter-final of the US Open, losing to Wawrinka, and the end of the season was special for the Argentinian, helping his country to win the Davis Cup for the very first time after wins over Ivo Karlovic and Marin Cilic

2017 - 38 wins in total, with a title defense in Stockholm and the best year-end positions since 2013. He opened the season in Delray Beach at the end of February and the right form didn't come until the US Open where he saved two match points against Dominic Thiem before beating Roger Federer in four sets for the place in the semis where Nadal stopped him in four sets. This was the first Major semi-final for del Potro in five years and this gave him the boost for the rest of the season, losing to Federer in the semi-final of Shanghai and in the final of Basel

The players who won a Slam but never been world no.1

Toni Nadal: Juan Martin del Potro could be World No. 1 if he was not so injury prone