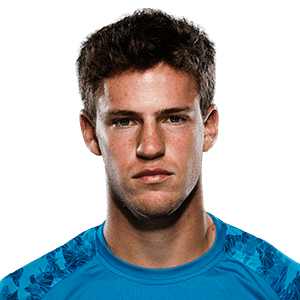 2010 - 23 Futures played, one title from five finals. Challenger debut in

2011 - Diego spent almost the entire season on clay and won one Futures title from five finals. Two Challenger wins from 12 tournaments played at that level for the place in the Top 400

2013 - Another great year that pushed him towards the Top 100, making an ATP debut in Vina del Mar and winning the first ATP match in Buenos Aires. Lost in all five Challenger finals he entered, in Tunis, Marburg, Banja Luka, San Juan and Montevideo

2014 - Diego finished inside the Top 100 for the first time, winning his first Grand Slam match at Roland Garros and scoring another win in Kitzbuhel. Five Challenger titles including the ATP Challenger Tour Finals in Sao Paulo

2015 - 11 ATP wins for the place in the Top 100 for the second straight year, having a chance to play against Roger Federer at Indian Wells and again in Istanbul where the Swiss prevailed in a close semi-final. Turned to Challengers on clay in the last part of the season, losing in four straight finals

2016 - Schwartzman grabbed 17 ATP wins to finish the year just outside the Top 50 despite a slower start. He changed all that in Istanbul where he saved a match point against Dzumhur and made a fantastic turnaround against Grigor Dimitrov in the final to win his maiden ATP title, followed by another final in Antwerp and two Challenger titles in Barranquilla and Montevideo

2017 - By far the best season he ever played, scoring 38 wins and reaching the quarter-final at the US Open after a win over Marin Cilic before losing to Pablo Carreno Busta. The first season with no Challenger played, holding to the ATP level and playing in the quarter-final of Monte Carlo Masters and in the semi-final of Istanbul, followed by the third round at Roland Garros. He played rock solid tennis in every part of the season, advancing into the quarters at least 11 times and fighting in another final in Antwerp, losing to Tsonga in straight sets

Diego Schwartzman: If I could, Roger Federer's serve is one shot I'd to my game

Diego Schwartzman reveals what he did with his first big money

Diego Schwartzman: There is nothing more beautiful than being able to help others