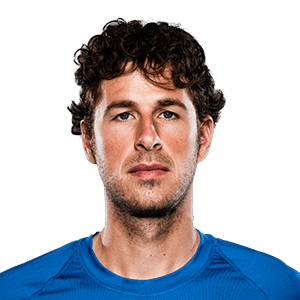 2005 - In his first professional season, Robin Haase played solely on the Futures level and managed to win his first title.

2006 - Haase made the Edinburg Challenger campaign in his first-ever Challenger played before he claimed his maiden Challenger title in Nashville at the end of the season.

Also, the Dutch debuted at the ATP level and made his Davis Cup debut.

2007 - Haase clinched his maiden ATP win in front of his home crowd in Rotterdam with beating Roko Karanusic.

The Dutch made it past the US Open qualifying event to make his debut at the Grand Slam level.

2008 - Haase earned his maiden Grand Slam win at the Australian Open when he stunned Ivan Ljubicic in the first round.

2009 - Haase missed the first nine months of the season but made back-to-back Challenger semi-finals in the lone two tournaments he played that year.

2010 - Haase put up an impressive year on the Challenger tour, winning five tournaments on that level.

The Dutch entered the top-100 for the first time in his career.

The Dutch broke into the top-50 for the first time in his career.

Haase also earned his maiden doubles title with Ken Skupski in Marseille, while he ended runner-up with David Martin in Chennai and Milos Raonic in Halle respectively.

2012 - Haase succesfully defended his Kitzbuhel title as he defeated Philipp Kohlschreiber in the final.

The Dutch debuted at the Olympics as he represented the Netherlands at the 2012 London Olympics.

Haase didn't have an impressive Olympics debut as he was beaten in the first round.

Also, Haase achieved his career-high ranking of No. 33 in the world.

2013 - Haase fell just short of winning an ATP title on two occasions as he ended runner-up in Gstaad and Vienna respectively.

The Dutch made his maiden Grand Slam final appearance in doubles but didn't claim a title as he and fellow compatriot Igor Sijsling were beaten by the Bryan brothers in the Australian Open final.

2014 - Haase made his first Masters doubles final but once again failed to win a title on the big stage as he and Feliciano Lopez were beaten in the Rome Masters final.

However, the Dutch still managed to win a doubles title that year as he and Andre Begemann won it all in Gstaad.

2015 - Haase made a disappointing start to the year as he lost his first seven matches of the season before his first singles win came at the Indian Wells in March.

Haase also once again experienced success in Kitzbuhel as he and Henri Kontinen made the final before losing to Nicolas Almagro and Carlos Berlocq.

2016 - Haase fell just short of winning his second Gstaad title as he was beaten by Lopez in the final.

The Dutch made back-to-back Olympics appearances but didn't impress once again, having exited the tournament in the first round.

2017 - Haase reached his maiden Masters 1000 semi-final at the Montreal Masters before he lost to Swiss Roger Federer.

The Dutch came close to winning the Marseille doubles title but he and partner Dominic Inglot lost the final to Julien Benneteau and Nicolas Mahut.

2018 - Haase had a successful year in doubles as he and fellow compatriot Matwe Middelkoop won it all together in Pune, Sofia and Umag respectively.

Robin Haase: You feel like an amateur when you play against Novak Djokovic

Robin Haase skips Australian Open for the first time since 2009

Robin Haase on his big comeback win over Dan Evans