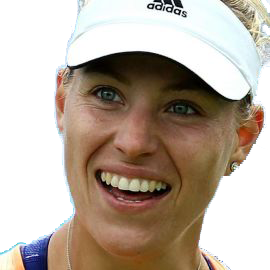 Angelique Kerber started playing tennis at the age of three. Her tennis idol growing up was Stefanie Graf. She reached the first WTA final of career at 2010 Bogotá and won her maiden titles in 2012, her first breakthrough top 5 season. She clinched the trophy at Paris [Indoors] (d. Bartoli in final) and in Copenhagen (d. Wozniacki in final) and lost two further finals in Eastbourne (l. to Paszek 57 63 75; held 5mp at 5-3 third set) and Cincinnati (l. to Li). In 2013 she won another WTA title at Linz (d. Ivanovic in final). In 2015, her fourth straight top 10 season Kerber added four titles in Charleston (d. Keys in final), Stuttgart (d. Wozniacki in final), Birmingham (d. Ka.Pliskova in final) and Stanford (d. Ka.Pliskova in final).

At 2016 Australian Open, Kerber became the fourth player to defeat S.Williams in a Grand Slam final (after V.Williams, Sharapova and Stosur) and the first Grand Slam champion to save match point en route to the title since Li at 2014 Australian Open. She finished runner-up at Wimbledon and won a second Grand Slam title at US Open (d. Karolina Pliskova in F) becoming the 22nd player to hold the WTA World No.1 spot since computer rankings were introduced in 1975. She was also the oldest to debut at World No.1.

Kerber, the fourth player in Open Era to reach three Grand Slam finals in the same year they reached their first, after Goolagong Cawley (1971), Graf (1987) and Hingis (1997), secured the 2016 year‐end World No.1 ranking, only the 12th WTA player to achieve the feat, and was voted WTA Player of the Year in 2016 by international media and fans.

She ended 2017 on a ranking of No.21 for her sixth consecutive Top 25 season. The best results of her season were a runner-up finish in Monterrey and semifinals at Tokyo [PPO] (l. Pavlyuchenkova) and Dubai (l. Svitolina).

In 2018, she won two titles, at Sydney (d. Barty to claim the first trophy since 27 tournaments) and the third Grand Slam crown of her career at Wimbledon (d. Serena Williams). She became the first German since 1996 to win Wimbledon as she hit only five unforced errors in the title-match to oust Williams in just 67 minutes. The win moved her to No.4 in the WTA Rankings, moving her back into the Top 5 after a near-11 month absence. At the end of the season, she owned a 12-16 record in tour-level finals: her 28 final appearances is the joint tenth-most among active players (level with Agnieszka Radwanska). Kerber posted semifinals runs at Australian Open (l. Halep in 3s, having held two match points), Dubai (l. eventual champion Svitolina) and Eastbourne (l. eventual champion Wozniacki having held match point), and reached five quarterfinals, in Doha (l. Wozniacki in 3s), Indian Wells (l. eventual runner-up Kasatkina), Miami (l. eventual champion Stephens), Rome (l. eventual champion Svitolina) and Roland Garros (l. eventual champion Halep). In Paris, she equaled her best performance. She also reached the third-round at Us Open and lost to Karolina Pliskova and Kvitova during Germany’s Fed Cup semifinal defeat to Czech Republic.

Angelique Kerber: I hope fans will be there when the season resumes

Angelique Kerber: In difficult moments, belief in God is an anchor for me

Angelique Kerber: Playing in Empty Stadiums Must Be Considered as a Last Resort

Billie Jean King and Angelique Kerber on the Cancellation of Wimbledon

Angelique Kerber: Be safe, smart and kind to one another

Angelique Kerber regrets not playing Stuttgart Open: “I was counting the days...”