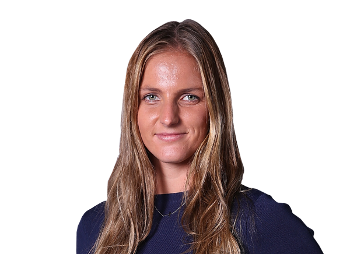 Born in Louny, north of Prague, at 2013 Linz, with sister Kristyna, became first set of twins to ever win a tour-level doubles title. That year she won her maiden WTA singles title in t Kuala Lumpur (d. Mattek-Sands in final) and posted her first top 100 season. In 2014 she won in Seoul (d. Lepchenko in final) and Linz (d. Giorgi in final), finishing the season ranked 24th.

Pliskova made Top 10 debut after 2015 Stanford runner-up finish, meaning that for the first time in WTA history, three Czech women ranked inside Top 10 at the same time. She became the eighth Czech woman to crack singles Top 10 since computer rankings were introduced in November 1975, after Navratilova, Mandlikova, Sukova, Novotna, Vaidisova, Kvitova and Safarova. In 2016, she won two titles, in Cincinnati and Nottingham, and advanced to her first Grand Slam final at US Open (l. Kerber), simultaneously making debut in R16, QF, SF and title match at the majors. Pliskova became first Czech to reach the US Open final since Helena Sukova in 1993 and defeating Serena Williams in the semifinal she ended the American’s 186-week reign at the top of the rankings. She qualified for the WTA Finals and helped Czech Republic defend Fed Cup title, going 1-1 in singles (d. Mladenovic, l. Garcia) before teaming with Strycova to defeat Garcia/Mladenovic in the decisive doubles match.

In 2017 she added further three titles in Brisbane (d. Cornet in F), Doha (d. Wozniacki in F) and Eastbourne (d. Wozniacki in F). In Grand Slam play, she reached semifinals at Roland Garros, quarter-finals at both Australian Open and US Open and posted second round exit result at Wimbledon. Despite that defeat, however, she claimed No.1 ranking on July 17, 2017 and became the first Czech woman to clinch the top spot since the computer rankings were introduced in 1975 (Martina Navratilova became No.1 on July 10, 1978 while representing USA).

The Czech completed the season making her third consecutive appearance at the WTA Finals, and matched her best result with her progression to the semifinals. Bidding to become the fourth Czech woman to lift the Billie Jean King Trophy after Navratilova in 1978-79, Novotna in 1997 and Kvitova in 2011, she lost to Stephens in her sixth semifinal of the season, ending the campaign with a 3-3 record at this stage. Previous defeats of No.3 Wozniacki and No.5 Kvitova improved her record against top 5 players in 2018 to 4-1. Besides, beating Kvitova she clinched the 50th career win over a top 20 ranked player.

Karolina Pliskova: It’s not in my personality to tell some jokes on court

Karolina Pliskova: I am happy to resume training with coach Vallverdu

Karolina Pliskova on Covid situation and Olympics: It was the right decision

Karolina Pliskova: Not possible for a single player to dominate

Karolina Pliskova: 'Elena Rybakina is on great run, her serve is massive weapon'

Karolina Pliskova: 'Alongside good tennis, you also need to be lucky to win a Major'