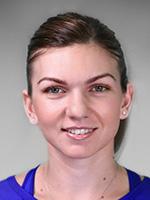 Raised in Costanta with Justine Henin and Roger Federer as her idols, Halep is a perfectionist and a hard-working competitor.

In 2010, her first season as a top 100, she played her first WTA final in Fès. Next year she broke into the top 50 for the first time. In 2013 Halep lived her breakthrough season: she reached the semifinals in Rome as a qualifier and won her first six WTA titles in Nürnberg (d. Petkovic in final), 's-Hertogenbosch (d. Flipkens in final), Budapest (d. Meusburger in final), New Haven (d. Kvitova in final), Moscow and Sofia (d. Stosur in both finals). In 2014 Halep became the third Romanian to compete at the WTA Finals and the first ever to beat a World No.1, before losing the third title-match of the year, including her maiden Grand Slam final at Roland Garros, her favourite tournament. Winning two twitles in Doha (d. Kerber in final) and Bucharest (d. Vinci in final), she completed the season at No.3, for the first time in top 10. In 2016 Halep posted her third straight Top 5 season, as she won three WTA titles in Madrid (d. Cibulkova in final), Bucharest (d. Sevastova in final) and Montréal (d. Keys in final).

In 2017 Halep won one title, defending her crown in Madrid (d. Mladenovic), and lost four further finals in Rome (l. Svitolina), Roland Garros (l. Ostapenko), Cincinnati (l. Muguruza) and Beijing (l. Garcia). Here, however, beating Ostapenko in the semifinals, he became the 25th different player to hold the No.1 spot in the WTA rankings. But in Grand Slam play, apart from losing her second major final, Halep reached QF at Wimbledon and fell at the first round at Australian Open and Us Open.

In 2018, Halep was one of six players to win three or more titles (also Kvitova – 5, Svitolina – 4, Bertens, Mertens, Wozniacki – 3) reaching an 18-15 record in career finals. She opened the season by winning singles and doubles (w/Begu) titles at Shenzhen, to claim her maiden title since Madrid in May 2017. At Australian Open she reached her third career Grand Slam final after saving triple match points in the third round to beat Davis in 3h44, in the longest women’s singles match ever in the tournament, after Schiavone d. Kuznetsova (2011, R16, 4h44) and Strycova d. Kulikova (2010, 1r, 4h19). She also saved another two match points to Kerber in the semifinals: she's believed to be the first player to save match points in multiple matches and reach a Grand Slam final. In the title match, she succumbed to Wozniacki. During the Sunshine Double, she advanced to the semifinals at Indian Wells (l. eventual champion Osaka) and made the third round in Miami (l. Agnieszka Radwanska). On clay, she produced quarterfinals showings in Madrid (l. Karolina Pliskova) and Stuttgart (l. Vandeweghe). For the second year in a row, she was runner-up in Rome (l. Svitolina in both 2017 and 2018 finals). At Roland Garros, she captured her first Grand Slam title in her fourth final defeating Sloane Stephens, becoming the 49th different woman to win a Grand Slam title in the Open Era, and the second Romanian woman to win a Slam after Ruzici at 1978 Roland Garros. She fell at the third round at Wimbledon, and reached back-to-back finals at Montréal (d. Stephens in F) and Cincinnati (l. Bertens after missing a match point in the second set tie-break): she was bidding to be the first woman to win the Premier 5 level Rogers Cup and Western & Southern Open titles back-to-back. She was forced to withdraw from New Haven with a right Achilles injury, then she fell at the first round at US Open (l. Kanepi): it was the first time in the Open Era the No.1 seed in the women’s draw at the US Open has fallen at the opening hurdle. She finished as the year-end world No.1 although she had to withdraw from the WTA Finals. She ended the season with four consecutive defeats, her longest losing streak since 2012, when she followed defeat in the Brussels final (l. Radwanska) with first-round exits at Roland Garros (l. Cetkovska), 's-Hertogenbosch (l. Medina Garrigues), Wimbledon (l. Medina Garrigues) and the Olympics (l. Shvedova). She also ranked No.1 in return games won.

Simona Halep will skip the US Open!

Simona Halep: Playing the US Open is a very personal decision we need to make

Simona Halep lost trust in powers: “I feel it on my skin… there’s a big difference”

Simona Halep admits: “I’ve been on lockdown for 6 years”

Simona Halep talks about the split from Darren Cahill in 2019