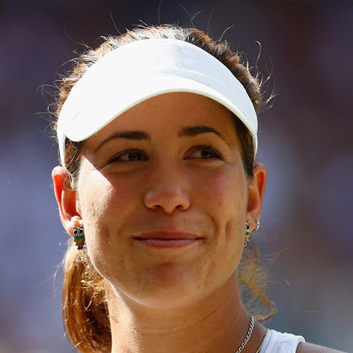 Muguruza was born in Caracas to a Venezuelan mother and a Spanish father. She moved to Spain when she was six, Muguruza made he WTA main draw debut at Miami in 2012, defeating No.9 Zvonareva to equal Andrea Leand and Julie Coin as the fastest player to beat a Top 10 opponent (in their second WTA main draw matches).

In 2013 she reached the fourth round in Indian Wells and Miami and the semifinals in 's-Hertogenbosch before undergoing right ankle surgery on July 2 and missing rest of season.

In 2014 she won her maiden WTA title in Hobart (d. Koukalova in final) and made her top-50 debut. She finished the season ranked No.21 and rose to No.20 after Li came off rankings a week later.

Muguruza enjoyed her breakout season in 2015, ending the year ranked No.3 and reaching her first Grand Slam final at Wimbledon. She won the title in Beijing and became one of six players to enter the top 10 during the season after Makarova, Suárez Navarro, Safarova, Karolina Pliskova and Bacsinszky. She was also the first Spanish player to compete at the WTA Finals in singles since 2001 (Sánchez Vicario) and reached doubles final (w/Suárez Navarro, l. Hingis/Mirza).

The Spaniard completed her second top-10 season in 2016. Her season highlight was winning maiden Grand Slam title at Roland Garros. As a consequence, she became the first Spanish woman to be ranked in Top 2 since Sánchez Vicario in December 1996 (as No.2).

Muguruza has won two titles in 2017, lifting her second Grand Slam title at Wimbledon, defeating Venus Williams in the final to register her 300th match win (at all levels), as well as winning in Cincinnati (d. Halep in F). On September 11, 2017, she ascended to become the 24th woman in the history of the WTA to hold the No.1 spot and second from Spain after Sánchez-Vicario in 1995.

After three top-10 seasons, Garbine Muguruza finished 2018 ranked No.18, her lowest year-end rank since 2014. She opened the season withdrawing before the quarterfinal match against Gavrilova in Sydney. She had to retire in Brisbane and made a second-round exit at Australian Open against No.88-ranked Hsieh. She was in contention to reclaim the No.1 ranking in Melbourne but needed to reach final and see other results go her way.

She reached her ninth career singles final in Doha (l. Kvitova), then she made the semifinals in Dubai (l. eventual runner-up Kasatkina, having held three match points). She then reached the round-16 in Miami and then she won her sixth career singles title in Monterrey (d. Babos).

Her clay court season was highlighted by the semifinals showing at Roland Garros (l. eventual champion and No.1 Halep): once again, she was one win away from returning to WTA World No.1 in Pari, but needed to reach final.

Garbine Muguruza on how winning the French Open changed her life

Garbine Muguruza shares about her life during quarantine for Vogue Spain

Garbine Muguruza: Fortunate to have Conchita Martinez as a coach

Garbine Muguruza Shows off More of Her Dance Moves