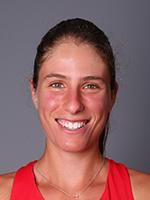 Born in Sydney to Hungarian parents, Konta became a British citizen in May 2012. She made WTA main draw debut at 2011 Copenhagen but had to wait until June 23, 2014 to break for the first time into the top 100 (after Eastbourne, l. to Giorgi in the second round). In 2015 she lived her first breakthrough season, after a phenomenal second half of the year that saw her rise from No.147 to No.47 by November 9 year-end ranking.

In 2016 Konta made a historic run to the semifinals at Australian Open (l. eventual champion Kerber) becoming first British woman to reach the last four at a Grand Slam since Jo Durie at 1983 US Open. She became the first British woman into Top 20 since 1986 on June 6, 2016, before celebrating her career‐first singles title at 2016 Stanford in maiden final (d. V.Williams in F). Later that year, Konta reached career‐first Premier Mandatory level final at 2016 Beijing (l. A.Radwanska) and consequently became the fourth British woman into the top 10 after Durie, Wade and Barker), the 119th woman to break into that elite group. Konta ended 2016 season reaching the semifinals at WTA Elite Trophy Zhuhai in November and was voted WTA Most Improved Player of the year.

In 2017 Konta arrived at Australian Open having won her second WTA singles title at Sydney, the city where she was born, on main draw debut (d.A.Radwanska in F). She lost in the quarterfinals in Melbourne Park but the she collected her third – and most prestigious – WTA tournament of her career at Premier Mandatory level in Miami. At Wimbledon, Konta upset No.2 Halep in the quarterfinals coming within two points of defeat and became the first British woman to reach the last four sinceVirginia Wade in 1978.

Johanna Konta on Roger Federer's proposal: It would have to be a merger of equals

Former World No. 4 Johanna Konta Launches her own Podcast Show

Johanna Konta: 'It's heartbreaking to miss Wimbledon, a sad situation for us all'

Johanna Konta: The situation is not good for my knee but I'm not getting stressed"

Kim Clijsters: 'There were some positive things but I still have to improve my game'