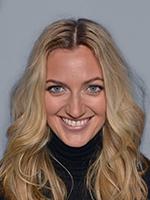 Petra Kvitova completed her first top 5 season in 2011. That year at Wimbledon she became With the first player born in 1990s to win a Grand Slam title. She added five further titles in at Brisbane (d. Petkovic in final), Paris [Indoors] (d. Clijsters in final), Madrid (d. Azarenka in final), Linz (d. Cibulkova in final) and at WTA Finals (d. Azarenka in final) which she won on her event debut. Ion 2012 she Kvitová lost in the semifinals to Li Na. Had she won the tournament, she would have been the new world no. 1. That year she won Montréal (d. Li in final) and New Haven (d. Kirilenko in final). In 2013 she ended at No.6 after two successes in Dubai (d. Errani in final) and Tokyo [Pan Pacific] (d. Kerber in final). In 2014, she beat Bouchard to win Wimbledon for the second time. She then won in New Haven (d. Rybarikova in final) and Wuhan (d. Bouchard in final). Her 2015 season highlights included three singles titles, at Sydney (d. Ka.Pliskova in F), Madrid (d. Kuznetsova in F) and New Haven (d. Safarova in F), where she clinched the title for the third time in the past four years: it marked first time she has won any tournament title three times. kvitova ended as a runner‐up at WTA Finals in Singapore (l. A.Radwanska in 3s).

In 2016 she defeated five Top 20 players en route to 2016 Wuhan title: No.18 Svitolina (2r), No.1 Kerber (R16), No.13 Konta (QF), No.5 Halep (SF) and No.12 Cibulkova (F). Kvitova Contested Rio Olympics in August 2016, winning the singles bronze medal (l. Puig in SF, d. Keys in bronze medal play‐off) and wWas part of Czech Republic team to defend Fed Cup title in November 2016 vs. France (l. Garcia, d. Mladenovic, then teamed w/Strycova to defeat Garcia/Mladenovic in decisive doubles match). She ended 2016 ranked No.11, after five straight Top 10 finishes, after winning the second title of the year at the WTA Elite Trophy in Zhuhai (d. Svitolina in F).

Shortly before Christmas in 2016, she was robbed at her home in the Czech Republic by a knife-wielding attacker, which resulted in tendon and nerve injuries to her left hand. Kvitova managed to come back at Roland Garros. In her second tournament of season, she clinched 20th singles title at Birmingham (d. Barty in F). Kvitova then enjoyed a return to form at US Open, upsetting Muguruza, the highest-ranked opponent she beat in 2017, en route to the quarter-finals.

In 2018, Kvitova won a WTA Tour-leading five titles in 2018, at St. Petersburg (d. Mladenovic), Doha (d. Muguruza), Prague (d. Buzarnescu), Madrid (d. Bertens) and Birmingham (d. Rybarikova), where she defended a title for the second time in her career after New Haven in 2014-15. She was the first player to win a title on three difference surfaces in a season since Serena Williams in 2015. The Czech has won at least one title every year dating back to 2011 and moved to the fifth place among active players for titles won. Her five appearances in finals is most title-matches she’s reached in a season since 2011. Kvitova won back-to-back titles at St. Petersburg and Doha for the first time since winning Linz and WTA Finals in 2011, en route to a 14-match winning streak between St. Petersburg (5), Fed Cup (2), Doha (6) and Indian Wells (1), equaling her joint highest win streak of her career. She also became the first player to win the Madrid title three times (also in 2011, 2015).
At the Grand Slams, she failed to reach the fourth round at any of the majors in a season for the first time in her career as she fell at the first round at Australian Open (l. Petkovic) and at Wimbledon (l.Sasnovich), had third round showings at Roland Garros (l. Kontaveit in two tie-breaks) and US Open (l. Sabalenka).

Kvitova re-entered into the Top 5 of the WTA Rankings on August 20, 2018 for first time since the week of October 26, 2015, as she claimed the semifinals stage in Cincinnati (l. eventual champion Bertens) and the quarter-finals in New Haven (withdrew prior to match vs. Suárez Navarro with a left shoulder injury). She steered Czech Republic to Fed Cup semifinals for the 10th year in a row, and followed this up by going 2-0 in singles play against Germany (d. No.11 Goerges and No.12 Kerber), but she had to withdraw from the final won against the USA.

She made her sixth appearance at the WTA Finals, and first since 2015, losing all the round robin matches to Wozniacki, Svitolina and Karolina Pliskova in the White Group. She ended the season on a five-match losing streak, the longest since 2010, when she lost six from Wimbledon through to the US Open.

Petra Kvitova on playing without fans: It will be a very tough decision

Petra Kvitova: Playing a Grand Slam without fans doesn’t look nice to me

Petra Kvitova: “Our job is far less important than those fighting the virus”

Petra Kvitova on Maria Sharapova: "I have so much respect"