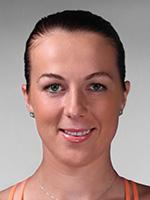 Anastasia Pavlyuchenkova played her first WTA main draw as a wildcard at 2006 Moscowmade Top 100 debut on July 7 (rose from No.137 to No.92) and Top 50 debut on November 3 (rose from No.56 to No.45). In 2010 she won two WTA titles at Monterrey (d. Hantuchova in final) and Istanbul (d. Vesnina in final), in 2011 she defended her title in Monterrey and reached eached last eight at 2011 Roland Garros (l. eventual champion Schiavone), 2011 US Open (l. eventual champion S.Williams), comleting the season at No.16.

Pavlyuchenkova opened 2017 completing a set of career Grand Slam quarterfinals by reaching this stage at 2017 Australian Open (l. eventual R‐Up V.Williams). A 10‐match winning streak helped her to win back‐to‐back titles in Monterrey (d. Kerber in F) and Rabat (d. Schiavone in F). In the Asian Swing she lifted her 11th title in Hong Kong (d. Gavrilova). Then she contested Zhuhai as World No.14 – her best ranking since reaching career‐high No.13 in summer 2011 – but failed to pass to the semifinals.

Sam Sumyk on end of partnership with Anastasia Pavlyuchenkova: "It was strange"

Anastasia Pavlyuchenkova and her particular lockdown

Anastasia Pavlyuchenkova: If it is necessary to play in December I will be ready

Anastasia Pavlyuchenkova Talks About Reasons for Split with Sam Sumyk

Belinda Bencic: 'It's disappointed to lose after such an amazing start'

Belinda Bencic doesn't think about becoming world no. 1. Find out why