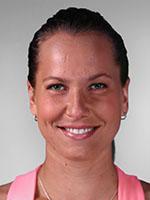 A two‐time junior singles Grand Slam winner, Barbora Strycova won her first WTA title in 2011, her first Top 50 season, in Québec City (d. Erakovic in final). In 2014 she beat Li in the last match of the Chinese star’s career and Wozniacki en route to her maiden Grand Slam singles quarter-final, at Wimbledon (l. eventual champion Kvitova). She was also runner-up twice in Birmingham (l. to Ivanovic in final) and Luxembourg (l. to Beck in final). In 2016 she posted her first Top 20 season finish (at No.20). Strycova helped the Czech Republic to win the Fed Cup final against France – d. Cornet in singles and Garcia/Mladenovic in the decisive doubles rubber (w/Ka.Pliskova) and won a bronze medal in doubles at Rio Olympics (w/Safarova, d. Hlavackova/Hradecka in bronze medal match). Her 2016 season was highlighted by reaching the second Premier‐level singles final of career in Dubai (l. Errani) and the third in Birmingham (l. Keys). In 2017 she dropped out of Top 20 after Birmingham (l. eventual runner‐up Barty in the second round ) and achieved her 500th of her career (all levels) in Montreal. In Linz, she won the second title of her career (d. Rybarikova in F) and made her second appearance at WTA Elite Trophy Zhuhai, bowed out in the round robin stage both times.

In 2018, she posted the eleventh successive Top 100 season at No.33. She advanced to the quarterfinals in the opening two tournaments of 2018, in Auckland (l. Hsieh) and Sydney (l. Barty). At Australian Open she moved to the fourth round for the third straight year (l. Karolina Pliskova). In Indian Wells, she posted her 21st doubles title but in singles she suffered an eight-match losing streak from Doha to the Roland Garros at WTA level. In Paris, she made the round-16 to seal her best result in the tournament to date (l. Putintseva).

After a third-round showing at Wimbledon, she went winless during the North American hard court swing in singles, but won the doubles title in New Haven (with Sestini Hlavackova, d. Hsieh/Siegemund). She equaled her best US Open result by reaching the third round (l. Mertens) then, during the Asian Swing, her best result was the quarterfinal showing in Tokyo (l. Osaka). She won her 23rd doubles title in Beijing and completed the season with a quarterfinal exit in the final tournament of the campaign in Linz (l. Van Uytvanck).

Then she helped Czech Republic to clinch her 11th Fed Cup title. She beat Kenin in the 3-0 victory over the United States, becoming the seventh Czech player to contest 20
or more Fed Cup ties after Sukova (54), Hana Mandlikova (45), Novotna (33), Kvitova (22), Safarova (21) and Kveta Peschke (20). Strycova improved her win-loss record in Fed Cup singles to 11-7.

Kermode on Roger Federer's proposal:If it's advantageous for both tours, it'll happen

Barbora Strycova dreams about Wimbledon title defense ahead of retirement

Is there a retirement light shining for Barbora Strycova?

Simona Halep: 'I feel healthy and motivated and want to win every match'

Barbora Strycova: I’ve been waiting for this success nearly 25 years