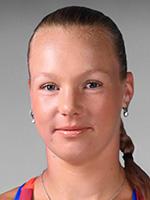 Kiki Bertens played her first event of career on ITF Circuit in the Netherlands in 2006 and made WTA main draw debut as a wildcard at 2011 ‘s‐Hertogenbosch (l. 1r). In 2012 she qualified in Fès. At the time she hadn't won a main draw match but she beatUrszula Radwanska, Chanelle Scheepers, Garbiñe Muguruza, Simona Halep and Laura Pous-Tio to win her firat WTA title. Consequently, she made her Top 100 debut. In 2013 she broke into the Top 50 after reaching the semifinals at Paris [Indoors] (ret. vs. Errani w/low back injury). Bertens moved through to R16 in Paris in 2014 (as qualifier, l. Petkovic), but has never progressed past 3r at any of the other majors, reaching that juncture at 2016 Wimbledon and 2r at the Australian Open in 2015 and the US Open in 2012 and 2015. That year she overcame her greatest fear. Dduring the Miami Open in 2014 a WTA physiotherapist discovered a lump on her thyroid gland.

Bertens had scheduled surgery after the French Open but she canceled it despite suspecting it was a cancer. She was prepared for the worst but right before 2015 Roland Garros she got the green light. That year she won her first doubles title with her longtime partner and friend Johanna Larsson in Hobart and Bastad.

At Roland Garros in 2016 Bertens made history. On a cold wet day in Paris, she became the first Dutch woman to reach SF at Roland Garros since Marijke Schaar in 1971 (l. SF), and at any Slam since Betty Stove at 1977 US Open (l. SF). She completed that breakthrough having made a clean sweep of titles at Nürnberg, claiming the singles (as qualifier, d. Duque‐Mariño) and doubles (w/Larsson, d. Aoyama/Voracova), becoming the fiest qualifier to win a WTA singles title since Vandeweghe at 2014 ‘s‐Hertogenbosch. She then reached the final in Gstaad (as qualifier, l. Golubic, d. No.17 Bacsinszky en route). She qualified for the WTA Elite Trophy and went 0‐2 in singles – falling to Svitolina and Vesnina – and finished the season ranked No.22, a big jump from her season‐ending ranking of No.101 in 2015.

In 2017 she Posted strong SF run at Rome (l. eventual R‐Up Halep) and reached QF at Madrid (l. Sevastova), which marked first QF at Premier Mandatory level. She defended her title in Nürnberg (d. qualifier Krejcikova) and lifted up the trophy in Gstaad (d. Kontaveit). She finished the season losing w/Larsson the title-match at the WTA Finals in doubles to Babos/Hlavackova.

In 2018, Bertens enjoyed a break-out year in 2018, reaching a career-best four singles finals across the season and breaking into the Top 10. She won three titles, in Charleston (d. Goerges), Cincinnati (d. World No.1 Halep) and Seoul (d. Tomljanovic in F). In Cincinnati, having also defeated No.2 Wozniacki, she became the first player to defeat the World No.1 and World No.2 at tournament since Muguruza at 2017 Cincinnati. Bertens reached one further final, at Premier Mandatory Madrid (l. Kvitova in F) to extend her career record in singles finals to 7-2.

Bertens, who broke into the top-ten at No.10 on October 8, 2018, garnered multiple wins at four Grand Slams in the same season for the first time in her career as she reached the third round for the first time at both Australian Open (l. eventual champion Wozniacki) and US Open (l. Vondrousova), lost at the same stage at Roland Garros (l. Kerber) and enjoyed her best result at Wimbledon in 2018 by reaching her second career Grand Slam quarterfinal (l. Goerges). She became the first Dutch woman to reach the last eight at Wimbledon since Krajicek in 2007.

She also made the quarterfinals stage in Nürnberg (as defending champion, l. Flipkens) and Montréal (l. Barty) and made her WTA Finals debut in singles. She reached the semifinals and lost to Stephens to mark the first time two debutantes have reached the SFs in the same year since 2007 (Ivanovic and Chakvetadze). Bertens, the first Dutchwoman to compete at the WTA Finals in singles in over 20 years, since Brenda Schultz-McCarthy in 1997, had not lost a semifinal clash throughout the season previously. Her campaign in Singapore brought her record against top-10 players to 12-6, the most top-ten wins on WTA Tour this season. Overall, she completed the year owning a 46-23 record, the most tour-level main draw wins of her career, and an improvement on 2017’s record of 32-26. For these results, she won the WTA’s Most Improved Player Award in 2018.

Kiki Bertens against Djokovic: "In what world does he live?"

Elise Tamaela: Everyone works hard to make the best of the situation

Elise Tamaëla, Coach of Kiki Bertens: Motto is to Remain Fit During the Time Off

WTA Charleston cancels the upcoming edition due to coronavirus