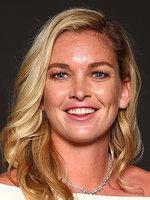 Coco Vandeweghe was born in a family to 1976 Olympic swimmer Tauna Vandeweghe and her then husband Robert Mullarkey. Her grandfather Ernie played for New York Knicks in 1950s, her uncle Kiki was general manager of NBA team the Denver Nuggets and a former UCLA basketball player.

In 2015 she posted her second top 40 season after reaching the quarterfinals at Wimbledon. In 2016 she completed the season at No.37. Season highlights centered on grass court swing as she won second career singles title at ‘s‐Hertogenbosch (d. Mladenovic in F), semifinal at Birmingham (l. Strycova) and the fourth round at Wimbledon (l. Pavlyuchenkova).

In 2017 Vandeweghe claimed her best Grand Slam performances. At Australian Open, her 25th major appearance, she beat beat Kerber to collect the first win over a World No.1 and became the 21st unseeded player to advance to a Grand Slam semifinal since 2001 Wimbledon (first Grand Slam with 32 seeds). In Stanford, Vandeweghe lost to Keys in the first all‐American final since her loss there to S.Williams in 2012. At Us Open she reached her second major semifinal (l. Keys): along with V.Williams and Stephens Vandeweghe made up the sixth all‐American Grand Slam semifinal line‐up. Vandeweghe reached the final in Zhuhai and completed the season giving the USA two crucial points in the 3-2 win over Belarus in the Fed Cup final, to maintain her unbeaten streak in 2017 in the competition.

Heather Watson: I was just pleased with how well I fought

Coco Vandeweghe: I'm enjoying it so much in this 'newcoming' of my career

Ashleigh Barty: Coco Vandeweghe is trying to break me out of my shell