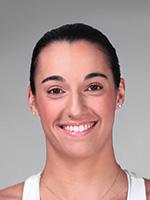 A former junior Us Open finalist, Caroline Garcia made WTA and Grand Slam main draw debut at 2011 Australian Open, advancing to the second round. She won maiden singles title at 2014 Bogotá (d. Jankovic in F) and won the doubles (w/Arruabarrena), resulting the first player to win singles and doubles at same event since S.Williams at 2012 Olympics.

In 2015 Garcia reached her only finals in consecutive weeks, in Acapulco and Monterrey (l. Bacsinszky in both), and played the WTA Finals Rising Stars Invitational where she also qualified in doubles (w/Srebotnik – lost in RR stage).

She posted a third successive Top 40 season in 2016, as she won two WTA singles titles in Strasbourg (d. Lucic‐Baroni in F) and Mallorca (d. Sevastova in F) and reached the first Premier‐level SF of her career in Dubai (l. eventual finalist Strycova). Member of the French Fed Cup Team that advanced to 2016 final against Czech Republic, she went 2‐0 in singles, posting wins over Ka.Pliskova and Kvitova, although the Czechs won the tie 3‐2.

In 2017 she played the maiden Grand Slam quarterfinal at Roland Garros. She then became the first player to win back-to-back titles in Wuhan and Beijing, the first Premier-5 and Premier-Mandatory triumphs of her career. As a consequence, she became the first Frenchwoman to qualify for WTA Finals in 11 years, after Mauresmo in 2006.

She advanced to the round 16 at Australian Open for the first time (l. Keys), then she was upset by No.450 qualifier Rybakina in the second round in St. Petersburg. She made back-to-back quarterfinals appearances in Doha and Dubai (l. Muguruza on both occasions). On hardcourt, she suffered an opening match exit at Miami (after 1r bye, l. Riske) after a round-16 showing at Indian Wells (l. Kerber).

On clay, she reached the semifinals in both Madrid (l. Bertens) and Stuttgart (l. Vandeweghe). In Stuttgart, she defeated No.41 Sharapova, 15-year-old Ukrainian Marta Kostyuk and No.4 Svitolina in the quarterfinals for her first top-5 win of the season. She made the quarterfinals in Rome and enjoyed a round-16 run at Roland Garros (l. Kerber) improving her career win total in Paris to 10, her most wins of any Slam.

On grass, she reached the quarterfinals in Mallorca and suffered a first-round exit at Wimbledon (l. Bencic), her earliest exit at a major since 2016 Australian Open.  After Wimbledon, she posted a quarterfinal showing in Montreal losing to eventual champion Halep moving to 0-7 against reigning World No.1s, reached the round 16 in Cincinnati and the quarterfinals in New Haven (l. Puig). She moved then to the third round for the third straight year at US Open (l. Suárez Navarro) and rose to a career-high ranking of No.4 following the tournament.

She began the Asian swing with QF showing in Tokyo (l. Vekic) and a second round exit in Wuhan as defending champion (l. Siniakova). She failed to defend her title in Beijing, and fell out of the top-10 for the first time since October 9, 2017. She won the only title of the year in Tianjin (d. Karolina Pliskova). She made her second appearance in Zhuhai to end the season, but she failed to reach the semifinals

Caroline Garcia: Players Are Ready to give up on pre-season

Caroline Garcia Quarantined at the Rafael Nadal Academy in Manacor

Caroline Garcia Confirms Her Participation in the WTA Strasbourg Tournament

Caroline Garcia Trains at the Rafael Nadal Academy in Manacor

Caroline Garcia on Goals for 2020: Want to Improve My Singles Career