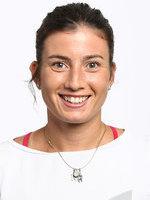 Anastasija Sevastova played her first WTA event at 2007 Istanbul and made her Grand Slam main draw debut as a qualifier at 2009 Roland Garros. In 2010, in Oeiras, she defeated Parra Santonja in the final and became the first Latvian to win a WTA singles title in 17 years (Savchenko at 1993 Schenectady). Retired from professional tennis in May 2013 due to various injuries – mostly muscular and back‐related – but returned to competition at ITF level in January 2015 after body had fully healed. Her comeback season was really impressive. She started unranked but finished at No.110 thanks to the semifinal-run in Florianopolis (l. to Pereira), the quarterfinals reached in Moscow and the four singles titles on ITF Circuit.

In 2016, her season highlights included reaching second and third WTA singles finals of career, firstly at Mallorca (l. Garcia) and Bucharest (l. Halep), and a quarter-final run at Us Open (l. Wozniacki).

In 2017, Sevastova upset No.3 Ka.Pliskova in the second round in Madrid, collecting her joint‐best career win by ranking, on the run of her first Premier Mandatory‐level semifinal (l. eventual champion Halep). She made her debut into the top 20. Then, she enjoyed the second straight quarter-final run at US Open (l. eventual champion Stephens in final set tie‐break) and contested in Zhuhai, in the last tournament of the season, her ninth semifinal in career (l. Gorges).

In 2018, Sevastova finished the season on a career-high year-end rank at No.11. She captured a single title, the third of her career on clay in Bucharest (d. Martic). She opened the season by reaching the semifinals in Brisbane (l. Sasnovich) followed by a first-round exit in Sydney (l. Cibulkova) and a second-round defeat at Australian Open (l. Sharapova). During the Middle Eastern swing, she made the round 16 in Doha (l. Halep). She then reached the same stage in Indian Wells, clinching her best result at the tournament. On clay, she enjoyed the semifinals in Charleston and the round 16 in Rome as the only notable results apart from the only title of the year.

On grass, she finished runner-up in Mallorca, fell in the round 16 in Eastbourne prior to being ousted in 1r at Wimbledon by eventual quarterfinalist Giorgi. In North America, she took the best performances of the year. After withdrawing before the quarterfinals clash in Moscow, she enjoyed a quarterfinals run in Montréal (l. eventual R-Up Stephens), eclipsing the $4 million career prize money mark in the process. Then she advanced to her first Grand Slam semifinal at US Open (l. Serena Williams) becoming the first Latvian woman to reach the last four in Flushing Meadows, upsetting No.7 Svitolina and No.3 Stephens en route. The defeat of No.3 Stephens was her joint-best win rankings-wise.

She reached the first Premier Mandatory final in Beijing (l. Wozniacki), thanks to her fourth top-ten win over No. 6 Osaka in the semifinals. In Moscow, she made the semifinals and as the second of two singles alternates at last week’s WTA Finals in Singapore (did not play a match). She completed the season making her second appearance at Hengqin Life WTA Elite Trophy in Zhuhai. She won a 66-minutes second set to close out the victory over Chinese No.2 S.Zhang in her first match in the Camellia Group but lost a hard-fought clash to No.17 Muguruza failing to clinch the semifinals. However, she claimed 43 tour-level wins: her highest previous number of wins in a single season was 37 in 2017.

Eugenie Bouchard: 'It sucks to lose, but life is still really good'

Sevastova: 'No close relationship with Thomas Muster. He has a wife'