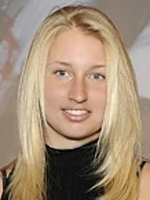 Born in Moscow, Gavrilova secured permanent residence in Australia in 2013 and has represented the country in Grand Slam play since 2014 US Open. Australian passport came through in December 2015 and then she started to represent Australia at WTA events as well. She made her WTA main draw debut at 2012 ‘s‐Hertogenbosch, scoring first career Top 40 win over No.35 Wickmayer.

Gavrilova made her Top 100 debut in March 2015, and Top 50 debut in May 2015. Season highlights included reaching first WTA semifinal at Rome (l. eventual champion Sharapova). She catapulted from No.233 at end of 2014 season to No.36 and was named WTA’s Most Impressive Newcomer for 2015.

In April 2016, represented Australia for first time in Fed Cup. She then enjoyed strong run of form to close 2016 season, reaching QF at Beijing (l. Svitolina), SF at Hong Kong after scoring her first victory over reigning World No.1 with defeat of Kerber, and her first WTA singles final at Moscow (l. Kuznetsova).

In 2017 she was seeded at a Slam for the first time (at No.22) at Australian Open posting a strong R16 run, equaling her best result at Melbourne, having reached this stage in 2016.

She reached her second career singles final at 2017 Strasbourg (l. compatriot Stosur) and overtook Stosur two weeks later ending her compatriot’s 452‐week reign as the Australian number 1. Then she became the first Australian finalist at New Haven, where she beat Cibulkova to claim her maiden WTA singles title. She played a further final in Hong Kong losing to Pavlyuchenkova in a match heavily disrupted by the weather.

Daria Gavrilova Talks About Her Injuries & Struggles on Behind the Racquet

Daria Gavrilova: I think I pushed myself today and I tried my best

Daria Gavrilova Hoping to Return to Form During Last Quarter

Daria Gavrilova: I haven’t had the best year

Daria Gavrilova: I would love to coach someday

Daria Gavrilova: Sam Stosur has been my role model for a long time

Daria Gavrilova: 'I can't wait for Fed Cup, it is a dream come true for us'