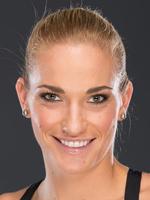 With only one WTA main draw win under her belt before the event, she caused some surprise to reach the semifinals without dropping a single set where she was beaten by Alexandra Panova, who finished runner-up of the tournament. Next week, she won her first WTA title at the Monterrey Open. Babos knocked out, among others, No. 2 seed Sara Errani and No. 3 seed Sorana Cîrstea en route to the final, where she beat Alexandra Cadanțu without facing a single break point during the match. Following this success, Babos made her top-100 debut. In 2013 she played three quarterfinals in Florianopolis, Monterrey and Budapest). In 2014 she completed and a third consecutive Top 100 season and reached her first Grand Slam doubles final at Wimbledon (w/Mladenovic, l. Errani/Vinci).

2015 season was highlighted by a runner-up finish at Marrakech (l. Svitolina in F), winning the WTA 125K Series event in Taipei (d. Doi in F), and three doubles titles, at Dubai, Marrackech and Rome (all w/Mladenovic). She also also qualified for 2015 WTA Finals w/Mladenovic, going out at RR stage.

In 2016 she reached the third singles final of career in Florianopolis (l. Begu in F) and the third round for the first time in a major (at Us Open, l. to Halep). Other 2016 highlights included semifinal appearances in Shenzhen (l. Riske) and Rabat, and quarterfinal runs in St Petersburg (l. eventual champion Vinci), Katowice (l. Ostapenko), Cincinnati (l. Muguruza) and Moscow (l. eventual champion Kuznetsova). She qualified for the WTA Elite Trophy Zhuhai falling in round robin stage (0-2) to No.18 Bacsinszky and No.28 S.Zhang and finished 2016 ranked No.26. In doubles she lost her second Grand Slam final at Wimbledon (w/Shvedova, l. S.Williams/V.Williams) and qualified for the WTA Finals with Shvedova losing in the first match to Mattek-Sands/Safarova.

In 2017 she won the second WTA singles title of career on home soil at Budapest (d. Safarova in F). In Indian Wells she were seeded for the first time at a Premier Mandartory event. She lost two further singles final in Tashkent to Kateryna Bondarenko and Quebec City to Van Uytvanck. Both times she won the doubles title with Andrea Hlavackova. They teamed up for the first time in May and finished the season with their fifth, and the most important, title of the year as they won the WTA Finals after a tight, high-quality third set victory over unseeded Kiki Bertens and Johanna Larsson.

Coco Gauff: 'I was nervous practicing on the court next to Rafael Nadal'

WTA Montreal: Venus Williams and Karolina Pliskova move to the second round