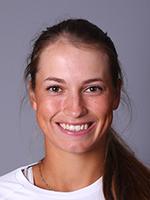 A two-time junior Grand Slam runner-up (2010 US Open, 2012 Australian Open), Putintseva made her WTA qualifying debut at 2009 Luxembourg and the WTA main draw debut at 2012 Copenhagen reaching the second round. In 2014 she reached the maiden WTA quarterfinals  in Osaka and Bastad, where she improved her result by advancing to the semifinal in 2015, her first Top 100 season (finishing No.74).

Her best result across the Slams came with the quarterfinal run at 2016 Roland Garros (l. S.Williams in 3 sets). She was the first Kazakh to reach the last 8 at Roland Garros – or at any major – since Shvedova in 2012 (l. QF). She became one of four unseeded players through to the quarterfinals at 2016 Roland Garros (also Bertens, Pironkova, Rogers): the last time this happened at a Grand Slam was 2009 US Open (K.Bondarenko, Clijsters, Oudin, Wickmayer).  Also in 2016 she reached a couple of semifinals in Kaohsiung (l. eventual champion V.Williams) and Washington, DC (l. eventual champion Wickmayer).

In 2017, she advanced to the first WTA Premier semifinal and the maiden final at any level in St Petersburg where she efeated No.8 Kuznetsova and No.5 Cibulkova before falling to No.51 Mladenovic in championship match. She became the first woman from Kazakhstan to reach a WTA singles final since Shvedova at 2015 Bogotá (l. Pereira). In the Asian swing, she made the quarterfinals in Tokyo [Japan Open] (l. eventual champion Diyas) completing the first back-to-back wins since Roland Garros.

Naomi Osaka says she is about to cry, leaves press conference

WTA Wimbledon: Naomi Osaka suffers another blow to bow out in round one