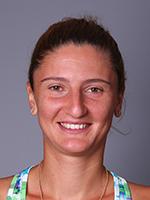 Begu started playing tennis when she was three-and-a-half years old as her aunt, former tennis player Aurelia Gheorghe, introduced her to the sport. At 14 years old, she took part in a one-month tour promoted by the ITF with seven other girls and eight boys, including  Grigor Dimitrov and Ricardas Berankis.

In 2011, she was elected WTA Newcomer of the Year in 2011 (media vote), as she reached two WTA finals in Marbella (l. to Azarenka in final) and Budapest (l. to Vinci in final). She finished the season ranked No.40 as the Romanian No.1.

In 2012 she won her first WTA title in Tashkent, beating Donna Vekic in straight sets in the final. Next year, she struggled with right shoulder injury since the Australian Open and missed three months of action. Confidence as well as ranking suffered, she said.

In 2015, her best season so far, she won the second title in Seoul (d. Sasnovich in final) and made R16 for the first time in a Grand Slam at Australian Open (l. Bouchard).

In 2016 she equalled her best showing in a major at Roland Garros (l. Rogers). With Halep also reaching R16, it was first time since 1997 two Romanian women reached the fourth round in Paris since 1997 (Spirlea and Dragomir). She also clinched the third WTA singles title in Florianopolis in July (d. Babos in final). Other notable results included a semifinal showing in Rome (l. S.Williams), and the quarter-final runs in Charleston (l. Kerber) and Madrid (l. Halep) where four Romanians reached last 8 for the first time at a Premier Mandatory event (also Halep, Cirstea and Tig). During the tournament, Begu secured her 300th match win of career (all levels) with R16 defeat of McHale.

Highlight of 2017 season were the semifinal showing in Istanbul (l. Mertens) and Moscow (l.Kasatkina) and the quarter-finals reached in Charleston (l. eventual champion Kasatkina) where she celebrated back‐to‐back wins for the first time since winning Florianopolis title.