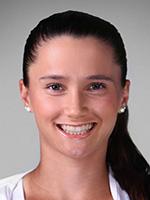 Upon turning 16, Davis left her hometown for training at the Evert Tennis Academy. The American won the USTA girls’ 18 & Under national title in 2011, earning a US Open main draw wildcard. On April, in Charleston, she was knocked unconscious when a big camera fell on her head: she suffered a concussion that kept her out of competition for months.

At 2012 Roland Garros she beat Barthel to clinch her first Grand Slam win and made her Top 100 debut on October 1. She claimed three quarterfinals in 2013 in Hobart, Monterrey and Québec City, and three times in 2014in Auckland (l. to Hampton), Eastbourne (l. to Keys) and Osaka (l. to Svitolina). That year she also moved to the third round at Australian Open and Wimbledon.

In a strong start to the 2017 season, she sealed a first career WTA title at Auckland (d. Konjuh in F) and also reached back‐to‐back quarterfinals in Doha (as qualifier, l. Wozniacki) and Dubai (l. eventual champion Svitolina), which was her first at a Premier 5 tournament. During clay court season, she reached the quarterfinals in Rabat (l. eventual champion Pavlyuchenkova).