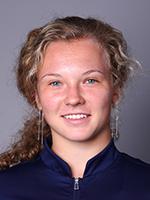 Siniakova was ranked the number two junior tennis player in the world in December 2012.

In 2014, she won WTA the 125K Series doubles title in Limoges (w/Voracova) and broke into the Top 100 after the semifinal run in Moscow, her best result at Premier-level (as a qualifier, d. Giorgi in QF, l. eventual champion Pavlyuchenkova). Next year, she reached the semifinals in Prague (l. to Hradecka) and the quarterfinals in Birmingham.

She began 2017 season by winning her first WTA singles title at Shenzhen posting the first two career wins over Top 10 players en route (No.4 Halep and No.10 Konta) before beating Riske in the title match. As a result, she made her Top 40 debut. In July, she won second career title, on clay at Bastad (d. Wozniacki in F). That summer, she finished R‐Up in US Open doubles final alongside Hradecka, losing to Y.Chan/Hingis.

In 2018, she notched the third consecutive Top 50 year-end finish at a career best No.31

She opened the season with a runner-up finish at Shenzhen as the defending champion (l. Halep). She suffered a second-round exit at Australian Open (d. Sakkari, l. Svitolina) and failed to clinch back-to-back victories until Prague where she moved to the quarterfinals (l. eventual champion Kvitova). She also made a semifinal run in Nürnberg (l. eventual champion Larsson) before the Roland Garros, In Paris, she defeated two-time Australian Open winner Azarenka in thr first round to celebrate her first victory over a major champion at a Grand Slam tournament. She went on to match her best Grand Slam singles run by reaching the third round (l. Strycova) and lifting the doubles title (with Krejcikova, d. Hozumi/Ninomiya).

She matched her best result at Grand Slam level at Wimbledon (l. Giorgi holding match point in second set). She tasted success in doubles at the All England Club, lifting the title partnering Krejcikova. Theyt became the first pairing to complete the Roland Garros-Wimbledon double since Kim Clijsters and Ai Sugiyama won both titles in 2003.  She reached a career-high doubles ranking of No.2 on July 16, and moved to the US Open semifinals in doubles (w/Krejcikova, l. eventual champions Barty/Vandeweghe). In singles, she put an end to a four-match losing streak and equaled her best Grand Slam performance by reaching the third round (l. Tsurenko).

During the Asian Swing, she reached back-to-back quarterfinals at WTA events for the first time in her career. As a qualifier she defeated No.4 Garcia and No.14 Muguruza on her way to the fifth quarterfinal finish in Wuhan. In Beijing she beat Van Uytvanck, Krunic and No.11 seed Bertens, claiming her fourth top-20 victory of the season, in straight sets to advance to her first Premier Mandatory quarterfinal (l. Wozniacki). A WTA Finals runner-up in doubles, she beat Riske and sealed the decisive point against Kenin in the fourth rubber to give Czech Republic its 11th Fed Cup title, and its 6th since 2011. Contesting her 4th tie, she improved to 3-1 her win-loss record in Fed Cup singles
rubbers, having only beaten American opponents as her only previous win came against Shelby Rogers in the second rubber of Czech Republic’s 3-2 defeat to USA in the 2017 World Group semifinals.