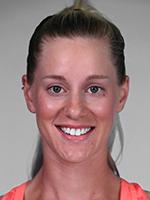 Kirsten Flipkens played tennis, football, volleyball and basketball before eventually deciding to pursue a career as a tennis player at the age of 12. At the age of 17, after winning Wimbledon and the US Open as a junior, she dropped out of school to continue her career as a professional tennis player.

Flipkens played her first professional match in 2001, but didn't officially become a professional tennis player until 2003. In 2004 she struggled with a congenital back injury during the second half of the season. In October 2005, she won her first WTA main draw match in Hasselt, against Italian Silvia Farina Elia.

In 2006 she made her Grand Slam debut at Roland Garros and reached the second-round. She also replaced the injured Kim Clijsters as the second member of the Belgian Fed Cup team in the final against Italy. Flipkens lost both her singles matches (against Schiavone and Santangelo). She and Henin-Hardenne then played the decisive doubles together, but had to retire in the third and final set due to Henin-Hardenne tearing a leg muscle in her leg.

At Wimbledon 2009 she gained a place in a Grand Slam third round for the first time in her career (l.Safina). She equaled that performance at US Open, marking her best result at Flushing Meadows. She also reached the quarterfinals in Luxembourg and finished as a Top 100 for the first time.

She played two semifinals between 2010 and 2011 but she underwent surgery on right wrist on October 25, 2010. She also battled injuries in first half of 2012, including blood clots in calf

discovered in April and was sidelined for two months causing ranking to dropp as low as No.262 in June that year. However she won the Bell Challenge in Quebec for her first WTA title,[34] after wins over top-seeded Dominika Cibulková, Mona Barthel and Lucie Hradecká in the final. She reached also the semifinals in 's-Hertogenbosch where she beat No.5 Stosur to clinch her maiden Top 5 win in her career.

She set career-high singles ranking of No.13 on August 5, 2013. That season she won a personal-best 32 matches. She was runner-up at 's-Hertogenbosch (l. to Halep in final). Her best Grand Slam result came at 2013 Wimbledon after defeating No.8 Kvitova in three sets to advance to the semifinals (l. to eventual champion, No.15 Bartoli). She produced best calendar year Grand Slam results in 2013, reaching also the round 16 at Australian Open (l. No.2 Sharapova).

Flipkens finished 2014 at No.46 after a semifinal in Auckland and four quarter-finals, and 2015 became her sixth Top 100 season in the last seven years (finishing No.93) with a couple of semifinals in Istanbul (l. to Tsurenko) and Linz (l. to Pavlyuchenkova).

She posted 24 main draw match wins in 2016. The season was highlighted by her third WTA singles final of career in Monterrey (l. Watson). She also reached the first quarter-finals at a Premier-level in two years in New Haven (as lucky loser, l. eventual champion A.Radwanska). She also moved to the last 8 at International-level in Auckland, Katowice and Tashkent. She represented Belgium at Rio Olympics, advancing to round 16 in singles (l. Siegemund) after beating No.6 V.Williams in the opening match, and won her first WTA doubles title of career in Seoul (w/Larsson).

2017 marked her eighth Top 100 season in past eight years. Highlight of the year in singles were the quarter-finals runs in Acapulco (l. Mladenovic) and New Haven (l. Gavriova). She won her second WTA doubles title of career in ‘s-Hertogenbosch (w/Cibulkova, d. Bertens/Schuurs in F), and was twice runner-up in doubles in Nürnberg (w/ Larsson, l. Melichar/Smith in F) and Luxembourg (w/ Bouchard, l. Kerkhove/Marozava in F).

In 2018 she reached the quarter-finals in Lugano (l. qualifier Lapko) where she claimed the fourth career doubles title there with countrywoman Mertens (d. Lapko/Sabalenka). She also reached her fifth career doubles final in Budapest (w/ Larsson, l. Garcia Perez/Stollar).

Alison Riske: I Don't See Myself Having Children and Coming Back To Tennis