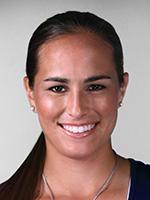 In 2014 she played and won her first WTA final in Strasbourg, defeating Sílvia Soler Espinosa. She became the first player representing Puerto Rico to win a WTA singles title; Kristina Brandi and Gigi Fernández, both born in Puerto Rico, won titles while playing under USA flag. She finished the year winning the inaugural Rising Stars Invitational as part of WTA Finals in Singapore (d. Zheng Saisai in F).

In 2016 she saved saved five match points during a second round win to Krystina Pliskova, who served a WTA‐record 31 aces in the match, and equalled her best Grand Slam performance. She also scored her best result at WTA Premier Mandatory tournament with a third round run at Indian Wells and made her Top 30 debut the week of September 26, 2016.

Puig was unable to replicate her success throughout 2017 and fell out of the top 50 on 12 June. She concluded her 2017 season without advancing past the second round of any Grand Slam or WTA Premier Mandatory tournament, however she reached her fourth career WTA final in Luxembourg.

Monica Puig:Trying to live normal routine within the fact that it’s not really normal

Monica Puig on Olympics: I am genuinely happy with the outcome

Monica Puig: "My last three years have been dark"

Monica Puig opens up on dealing with depression

Monica Puig Pulls Out of Australian Open; Kaia Kanepi Gets Into Main Draw