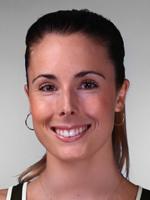 Alizé Cornet had an impressive juniors record. In 2007 she won the Roland Garros and reached a career-high combined ranking of world No. 8 on 11 June. Her name means a wind that blows from the east, a monument to her parents' passion for surf.

In 2008 she reached her first finals, in Acapulco and Rome, her first Tier I title match (l. to Jankovic), before beating Klepac to collect her first title in Budapest. Poor results followed in 2009, when she reached a single semifinal in Bad Gastein, and 2010, when she lost in the opening round at all four Grand Slam.

Cornet won her second title in 2012, in Bad Gastein (d. Wickmayer in final) and played a further final in Strasbourg (l. to Schiavone). There, in 2013, she did better and won the title beating Hradecka. Consequently, she qualified for the first time to the Tournament of Champions in Sofia but she didn't move past the group stage. Cornet ended the year at No. 27, her highest since 2008.

In 2014, her second top 20 season, she won one WTA title in Katowice (d. Giorgi in final) and lost two further finals in Dubai (l. to V.Williams) and Guangzhou (l. to Niculescu). That year she made history becoming the first player to beat Serena Williams, then the World No.1, in tgree straigh meetings (Dubai, Wimbledon and Wuhan via ret.) since Henin in 2007. Cornet dropped out of Top 20 again after 2015 Dubai, and finished that dismal season at No.43.

In 2016 Cornet won the fifth singles title of her career in Hobart (d.Bouchard in F). Did not play between 2016 Australian Open (l. Zhang in 2r) and 2016 Miami due to continuing back injury (bruised vertebrae). Had announced in February she would be out for six months, however, recovery was quicker than expected. Member of rench Fed Cup Team that advanced to competition final vs. Czech Republic in 2016 (l. Strycova), she finished the season at No.46 with a SF run at WTA 125K Series event in Limoges (l. Alexandrova).

In 2017 she reached the fourth round in a Grand Slam for the fourth round, at Roland Garros (l. Garcia), her best result in a major. She was one of three French women to reach R16: there weren't so many homegrown player in the second week in Paris since 1994 (Pierce, Halard and Dechaume‐Balleret). Cornet opened the season by advancing to 11th career singles final (and second at Premier‐level) at Brisbane (l. Ka.Pliskova), after posting two Top 10 wins en route to the final – d. No.5 Cibulkova (QF) and No.7 Muguruza (SF – via ret. w/right thigh injury). Then, she never went beyond the quarterfinals for the rest of the year.

Alize Cornet to Work with Sandra Zaniewska in 2020