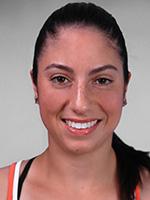 Christina McHale lived in Hong Kong from age three to eight after father’s job was relocated. Her older sister Lauren played college tennis and is now married to ATP player Ryan Harrison. She

played her first WTA qualifying at 2008 New Haven and made main draw debut at 2009 Australian Open (both as a wild-card), recording her first tour-level match win at 2009 US Open as she defeated Hercog in the second tour-level main draw (l. Sharapova).

She enjoyed her breakout year in 2012 when she became youngest member of US Olympic tennis team (four days younger than Ryan Harrison) and also reached the third-round of three straight Slams (Australian Open, Roland Garros, Wimbledon). McHale achieved her career-best ranking of No.24 the week of August 20, 2012, but contracted mononucleosis and dropped out of the Top 100 on August 12, 2013 (to No.115), before finishing the year at No.68.

McHale reached her first WTA final in Acapulco in 2014, where she was runner-up to Cibulkova. 2015 was her fifth straight Top 100 season (finishing No.64) as she reached the semifinals at at Tokyo [Japan Open] (l. to Linette) and two quarter-finals in Rome and Washington DC.

McHale posted her third non-consecutive Top 50 season in 2016 (first since 2012), at No.45. That year she won a career-best 26 main draw matches and her first WTA singles at Tokyo [Japan Open] (d. Siniakova). Other singles highlights in 2016 included reaching the semifinals in Acapulco and the round 16 in Madrid and Rome. 2016 season also brought first two WTA doubles titles of career, captured in Hobart (w/Han) and Tianjin (w/Peng).

She posted her seventh straight Top 100 season in 2017 (at No.63), finishing the season as one of 13 American women to feature in year-end Top 100. Highlights of 2017 were semifinals runs in Acapulco and Tokyo [Japan Open] and quarter-finals in Tianjin.

Caroline Wozniacki reveals what she learned the most from her illness