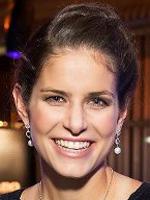 Julia Goerges made her top 10 debut ion June 9, 2008. In 2010 she lived her first top 50 season, thanks to her first title in Bad Gastein (d. Bacsinszky in F) and a futher final lost in Luxembourg. In 2011 she went 15-3 in spring clay court season, reaching winning the second WTA title in Stuttgart (d. Wozniacki in final), reaching the semifinals in Madrid (l. to Azarenka) and the quarter-finals in Charleston (l. to Vesnina), finishing the season at No.21. In 2012, her first Top 20 season (finishing No.18), was runner-up twice in Dubai (l. to A.Radwanska in final) and Linz (l. to Azarenka in final).

She fell 15 times in the first round in 2013 and struggled with form in 2014 when she lost in 1r or 2r at 15 events and at one point dropped out of Top 100, but reached two semifinals, in Pattaya City (l. Ka.Pliskova) and Québec City (l. Lucic‐Baroni) and her first Grand Slam final of any kind at Roland Garros, finishing runner‐up in mixed doubles (w/Zimonjic; l.Groenefeld/Rojer) Goerges opened 2016 by reaching first WTA singles final in nearly four years, finishing runner‐up at Auckland (l. Stephens), and completed the year with a qualification for the WTA Finals in doubles (w/Ka.Pliskova).

In 2017, Gorges hit 412 aces. Only two other players have reached the 400‐ace mark in a season: S.Williams (2012‐15) and Karolina Pliskova (2014‐17). In Moscow, she ended a six‐year title drought defeating three Russians en route to the title (Monova, Vikhlyantseva and Kasatkina in F). She overtook Kerber to become German No.1 and also returned to Top 20 for first time since February 2013. Also assured her a place in the field for the WTA Elite Trophy in Zhuhai and went to win her second title in a row, her fourth in career. As a consequence, Gorges finished the year in the Top 20 for the first time since 2012, at a new career‐high of No.14.

Goerges began the 2018 campaign with the fifth title of her career in Auckland (d. Wozniacki) and extended her title streak to three, having previously won Moscow and Zhuhai to close out the 2017 season. Her 15-match winning streak ended with a second-round exit at Australian Open.

She made her Top 10 debut on February 5, 2018 after a semifinals run in St.Petersburg (l. eventual champion Kvitova) and reached the quarterfinals in Doha before retiring in her match against Kvitova due to a hip injury.

The German began the clay court swing in Charleston where she finished as runner-up (l. Bertens). Then she also made the third round at Roland Garros (l. S.Williams) and Madrid (l. Garcia), and withdrew from Rome due to illness.

She went 2-2 on grass in lead-up to Wimbledon, reaching the quarterfinals in Birmingham (l. eventual champion Kvitova) and dropping the second-round opener in Eastbourne. Then, she posted her best Grand Slam result at Wimbledon, where she reached the semifinals (l. Serena Williams). With Kerber winning the title, it marked the first time that two Germans reached the last four at the same Slam since 1993 Roland Garros.

After Wimbledon, she reached the quarterfinals on clay at Moscow [River Cup] (l. eventual champion Danilovic). Then, she opened the summer hard court season with a round 16 showing in Montréal (l. Sevastova), her career-best result at the Rogers Cup. She advanded to the semifinals stage in New Haven and fell at the second round at Us Open (l. Makarova).

During the Asian swing, she reached the round 16 oin Beijing (l. Osaka) and the second-round in Wuhan (l. qualifier Kenin). She returned to Europe in October to win her sixth career title, at Luxembourg (d. Bencic). She came back to Zhuhai to defend her title but lost in the semifinals. At the end of the season, she hit 492 aces, 80 more than her tally in 2017 season.

Julia Goerges: Winning a Grand Slam would be a dream

WTA lucky not to have the Federers, Nadal and Djokovic - Goerges