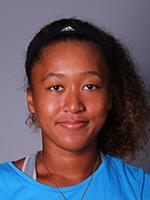 Born in Osaka, the Japanese Naomi Osaka moved to the USA when she was three years old and holds dual citizenship: currently, she lives in Fort Lauderdale and trains in Boca Raton. Her father, Leonard Max Francois, was born in Haiti and attended college in New York before moving to Japan where he lived for 13 years. Her mother, Tamaki, is Japanese; she also has an older sister, Mari, also on tour.

Osaka made WTA qualifying debut at Québec City in 2013 (l. Dabrowski). Ranked No.406, she made her WTA main draw debut at 2014 Stanford. As an alternate, she won through qualifying (achieving first WTA qualifying wins in the process), and came from match point down to shock No.19 Stosur in the first round, before losing to
No.18 Petkovic. In 2015, she won the 2015 WTA Rising Stars Invitational in Singapore defeating Garcia in the final saving match points).

She finished 2016 at then career-high ranking of No.40, which was her first Top 200 finish, and was consequently voted 2016 WTA Newcomer of the Year. The highlight of 2016 was the career-first WTA final at Tokyo [PPO] (l. Wozniacki). She also reached three quarterfinals, in Acapulco, Florianopolis and Tianjin, and the third round at 2016 Australian Open, Roland Garros and US Open. She received direct entry into 2016 Wimbledon but withdrew with a right knee injury.

She produced her second Top 100 season in 2017, finishing at No.68 as the Japanese No.1. Osaka book-ended the season with quarter-finals showings in Auckland and Hong Kong; other highlights included third round runs at Wimbledon and US Open. That year, she scored her first Top 5 win when she upset No.5 V.Williams at 2017 Hong Kong. Her upset win over defending champion and No.6-ranked Kerber at 2017 US Open had marked her first career Top 10 win

In New York, she defeated six-time champion Serena Williams in the final to become the first Japanese player to win a Grand Slam title. Thanks to that run, she passed USD $5 million in prize money for the season – No.2 (behind Halep) on the 2018 list of top earners. The US Open triumph made her the first Japanese woman to reach Grand Slam final and the youngest US Open champion since Sharapova in 2006.

She opened the campaign reaching the round 16 at Australian Open, became youngest Japanese player to reach that stage at a Grand Slam since Sugiyama at 1995 Roland Garros (19 yrs, 342 days) and the youngest player from Japan to reach the fourth round at Australian Open since Date in 1990 (19 yrs, 122 days). Osaka also reached one further final, at Tokyo [PPO] (l. Karolina Pliskova) and completed the year with a 2-2 record in WTA title-matches, having also finished as R-Up at 2016 Toyko [PPO] (l. Wozniacki). By reaching the Tokyo  final, she became the first maiden Slam champion to make the final of her next event since Azarenka won Australian Open and then Doha in 2012.

She made her debut appearance at WTA Finals on a career-high ranking of No.4 as the third ever player from Japan to appear at the season-ending tournament after Kimiko Date (1994-96) and Ai Sugiyama (2003). But she lost all her round-robin matches so, following the semifinal loss in Beijing, she suffered four consecutive defeats for the first time since 2017, when she lost five between the Us Open and Beijing. Osaka, who completed the season with a 3-9 record against Top 10 players and a 4-4 mark in deciding sets, has won 54-straight matches when winning the first set since her final match of the 2016 season in Tianjin (vs. Kuznetsova in the quarterfinals).

Naomi Osaka and Kei Nishikori looking to play US Open