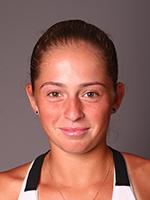 Introduced to tennis at age five by her mother, Jelena Ostapenko took ballroom dancing classes for seven years. She made her WTA main draw debut at 2014 Tashkent (2r, l. Pervak). In 2015 she played her first WTA final at 2015 Québec City (l. Beck) and completed the year at No.79 for first Top 100 finish (up from No.308 in 2014). Having leapt 229 spots, that was the second‐highest year‐end rankings jump, after Kasatkina.

Ostapenko ended 2016 ranked No.44 for her first Top 50 year‐end finish (and second consecutive Top 100) thank also to her maiden final at Premier 5-level in Doha (l. Suárez Navarro). In 2017 she advanced to third career singles final at Charleston in April, falling to then fellow 19‐year‐old Kasatkina in the first all‐teenage final on tour since 2009 Linz (Wickmayer d. Kvitova). She won the Roland Garros (d. Halep in F) on only her eighth Grand Slam main draw appearance, the fewest number before winning debut Slam title since Sharapova at 2004 Wimbledon. Ostapenko became the first Latvian player to reach the championship match at a Grand Slam and the lowest‐ranked player (No.47) to lift the trophy in the Open Era. She was the first woman to win her debut tour‐level title at a Grand Slam since Barbara Jordan at 1979 Australian Open (d. Walsh in F) and the first player to win their debut title at Roland Garros since Gustavo Kuerten, who lifted the title on June 8, 1997 – the day Ostapenko was born. The Latvian clinched the second title it Seoul (d. Haddad Maia in F) and completed the first top-10 season. She made her debut at WTA Finals where she lost to Venus Williams in the 3-set match involving the most amount of games ever at the tournament (37).

She began the season with first-round exits in Shenzhen (l. Kristina Pliskova) and Sydney (l. Makarova), before reaching the third round at Australian Open (l. Kontaveit). She reached the quarterfinals in St. Petersburg (l. eventual champion Kvitova) but suffered opening match defeats in Doha and Dubai.

She rose to career-high No.5 ranking after the third-round showing in Indian Wells. In Miami, she reached her only final of the season (l. Stephens). The result was her best showing at a WTA Premier Mandatory tournament. At 20 years, 297 days old, she became the youngest player to reach the Miami final since Azarenka (19 years, 237 days) won the title in 2009. During her run, she saw off No.9 Kvitova in the round-16 and No.4 Svitolina in Miami in the quarterfinals to register multiple Top 10 wins in the same tournament for the first time in her career.

On clay, she reached the quarterfinals in Rome and Stuttgart, but she suffered a shocking first-round upset at Roland Garros as the defending champion (l. Kozlova): she became only the sixth player in the Open Era to lose the opening match of her Grand Slam title defense.

She enjoyed a quarterfinal showing in Eastbourne (l. A.Radwanska) in her lone tune-up for Wimbledon, where she became the first woman representing Latvia to reach the last four (l. eventual champion Kerber). After a third-round run at Us Open, she never moved past the second round in Seoul, Wuhan, Beijing and Hong Kong, the last four events of her campaign.

Jelena Ostapenko's Father Passes Away: Dear Dad, you will stay forever in my heart

Gabriela Dabrowski and Jelena Ostapenko team up ahead of 2020 season

Coco Gauff: 'I am still shocked'