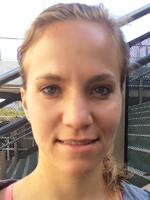 Viktorija Golubic made debut on ITF Circuit at $10k event in Budapest in 2008. She made her WTA qualifying debut at 2010 Budapest, and her main draw debut at 2013 Bad Gastein. Prior to 2016 had contested two tour-level events, having come through qualifying on both occasions: 2013 Bad Gastein (d. Bertens, l. Hlavackova), 2014 Shenzhen (d. Wozniack, l. Beck).

She opened 2016 season by winning her eighth (and most recent) singles title on ITF Circuit, at $25k ITF in Hong Kong. She ended 2016 at No.57 for best year-end finish of career (up from No.178 in 2015). Her season highlights were winning maiden WTA singles title in Gstaad (d. Bertens in F) and runner-up finish in Linz (l. Cibulkova in F). She made her Grand Slam debut at 2016 Australian Open (as qualifier, l. Suárez Navarro in 1r), and qualified for Roland Garros reaching the second-round (l. Safarova). Other 2016 highlights included the quarterfinals in 's-Hertogenbosch (l. Bencic), Tokyo [Japan Open] (l. eventual champion McHale) and Guangzhou (l. Kontaveit). Reached the second-round in Katowice (l. Babos) and Bastad (l. Errani). Entering 2016, had posted just two tour-level main draw wins in career. By comparison, registered 20 main draw wins in 2016. She posted her career-high ranking of No.53 on October 24, 2016.

In 2017, Golubic could not emulate her results of the previous year. She won only four matches in the first half of the season and subsequently dropped out of the top 100 again.

WTA Gstaad - Schnyder comes back to win, Garcia and Kontaveit through

WTA LINZ: Dominika Cibulkova and Viktorija Golubic will meet in the final match