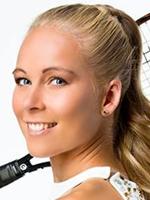 Johanna Larsson, who loves watching all sports, started playing tennis at age 5. She played her first WTA qualifying at 2004 Stockholm, and made her main draw debut at same tournament in 2006 (both as wildcard). She cracked into the Top 100 on June 14, 2010 after reaching her first WTA final at Portoroz (l. Chakvetadze). She finished also runner-up at 2011 Bastad (l. Hercog) and 2013 Bastad (l. S.Williams).

In 2014, she reached for the first time the third-round at Grand Slam level, at Roland Garros (l. Bouchard) and 2014 US Open (l. Jankovic)

In 2015 she won the first WTA singles title, at International-level Bastad in 2015 (d. Barthel) and claimed the first quarter-finals showing in a major in doubles, at Australian Open, partnering Bertens.

In 2016, she equaled that performance at Roland Garros. In singles, she ended the season at No.50, her highest year-end finish. Season highlights included reaching the first semifinal at WTA

She posted her eighth consecutive Top 100 season in 2017, finishing at No.80 (down from career-high No.50 in 2016). In singles, she reached the semifinals in Bogotá and the quarter-finals in Gstaad, Linz and Luxembourg. She also won the 13th ITF singles title of career at $100k event in Contrexeville. A 13-time WTA doubles title winner, Larsson enjoyed continued success here in 2017, collecting titles at Auckland, Gstaad, Seoul and Linz (all partnering Bertens). The team of Bertens/Larsson also qualified for WTA Finals for the first time, advancing to final (entered title match on 10-match streak, l. Babos/Hlavackova).

In 2018, Larsson won her first WTA singles title in three years in Nurnberg, edging American Alison Riske in straight sets. The victory was the second title of her career, as she raised the trophy in her last appearance in a singles final on home soil in Båstad in 2015.

Johanna Larsson: I love to play for Sweden and in teams

WTA Nurnberg: Allison Riske and Johanna Larsson will play for the title