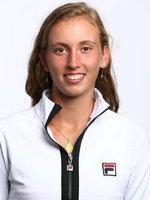 Elise Mertens played first events of career on ITF Circuit in Belgium in 2010. Her earlier coaching history includes Belgian federation until early teens, as well as a year at the Mouratoglou Academy in Paris, then she moved to the Kim Clijsters Academy in Belgium.

She made her tour-level debut at 2015 Antwerp (fell in qualifying) and her WTA singles main draw debut at 2016 ‘s-Hertogenbosch – as qualifier, advanced to QF (l. Mladenovic).

In 2016 she also reached the second round on grass at Mallorca (as qualifier, d. Schiavone in 1r, l. Jankovic) and won her first WTA title of any kind in doubles at 2016 Auckland (w/Mestach).

In 2017 Mertens won the Hobart International, beating No.3 seed Monica Niculescu in the final: she was the first qualifier to win a WTA title since Bertens at 2016 Nürnberg. As a result of this she broke into the WTA top 100 for the first time, on 16 January. During the Us Open Series, she reached the first Premier-level semifinal in New Haven (l. Cibulkova) and made Top 40 debut- She finished the season at No.36 after reaching the semifinals in Luxembourg.

Elise Mertens completed her best season in 2018 as she won three titles. The Belgian enjoyed a successful title defense in Hobart (d. Buzarnescu), where she had won her maiden title in 2017, and completed a sweep of triumph by teaming up with Schuurs to defeat Kichenok/Ninomiya in the doubles final. In the summer, she started the clay court season with back-to-back titles in Lugano (d. Sabalenka) and Rabat (d. Tomljanovic).

She opened the season advancing to the first Grand Slam semifinal of her career at Australian Open. Making her debut at the event, she
beat No.23 Gavrilova in the second-round and No.4 Svitolina in the quarterfinals, her first win over a Top 5 opponent, to become the first Belgian to reach a Grand Slam semifinal since Flipkens at 2013 Wimbledon. Despite losing to Wozniacki, she made her top 20 debut and passed $1 million in career prize money.

On clay, she moved to the round 16 at Roland Garros, clinching her best result there. She finished the clay swing with tour’s best record on the surface, 16-2, having lost only to Simona Halep at Roland Garros and Madrid.

On grass, she reached the third-round at Wimbledon (l. Cibulkova) for her career-best result at the All England Club.

She began the North American hard court season with runs to the semifinals in San Jose (l. eventual champion Buzarnescu), to the quarterfinals in Montréal (l. defending champion Svitolina) and Cincinnati (l. Kvitova). In Ohio, she defeated No.3 Stephens to score her second career Top 5 win. Then she became the first woman from Belgium to reach the fourth round at US Open since 2010, eventually
losing to defending champion Stephens. During the Asian Swing, she won back-to-back matches only in Tianjin where she posted a quarterfinals showing. A doubles quarterfinalist at the WTA Finals in Singapore.

The Belgian posted 46 main draw match wins in 2018: by contrast, prior to this season owned only 36 wins at this level across her entire career. She finished the season making her debut in Zhuhai, ranked at career-high No.13. She beat No.20 Kontaveit sealing the sixth career Top 20 win, but she lost to German No.2 Goerges and failed to move to the semifinals.

Elise Mertens: It took me a while to believe I could beat the Top 100 players

Elise Mertens on the Roland Garros Move and Staying at Home

Hobart: Former champion Garbine Muguruza starts off with a win