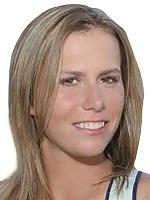 Born in Uzbekistan, Varvara Lepchenko received political asylum in the United States in 2001 because her Russian–Ukrainian heritage allegedly made them a target of persecution in their homeland. They lived in the USA for more than five years before Lepchenko changed nationality in 2007. She officially became a US citizen in September 2011 and currently resides in Allentown, Pennsylvania.

She played her first professional match in the WTA qualifying at 2000 Tashkent where she made her main draw debut in 2001.

At 2012 Roland Garros she reached for the first time the round-16 at Grand Slam level (l. Kvitova), claiming her best result in a major. She had a career year in doubles in 2013 as she partnered with Zheng to make a semi-final run at Australian Open and then a quarter-final showing at Roland Garros.

In 2014, the American lost to Karolina Pliskova her career-first WTA singles final in Seoul after beating Radwanska for the second time in few weeks: she had defeated her in Stanford clinching the first of her four career Top 5 wins. In 2015 she equaled her best Grand Slam performance as she moved through to the round-16 at Us Open before losing to Azarenka.

Lepchenko ended 2016 at No.87, her first finish outside the Top 50 since 2011 (No.110). The campaign was highlighted by quarter-finals appearances in Brisbane (l. Suárez Navarro), Nürnberg (l. Duque-Marino) and Tokyo [Japan Open] (l. Zhang).

She ended 2017 at No.62, up from No.87 in 2016, as she reached the semifinals in Rabat (l. Schiavone). She also movedto the second-round at Australian Open (l. Duan) and Roland Garros, and the third-round in Toronto after beating the French Open champion and then-No.12 Ostapenko in the second round.

WIMBLEDON - Serena Williams claims the first win at SW19 since 2016

WTA RABAT - Schiavone's dream continues: she reaches the final and will face Pavlyuchenkova

Tennis Anti-Doping Programme: Decision in the case of Varvara Lepchenko

No silent bans anymore, says David Haggerty: ´We are to be as transparent as possible´