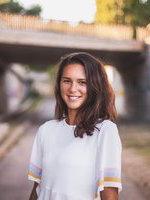 Vikhlyantseva played her first professional match in St. Petersburg in 2012 at the $10k ITF event (made 1r exit) and made WTA main draw debut at 2015 Shenzhen, losing to No.4 Halep in 2r.

In 2016 she won her first ITF singles titles at $25K in Plzen and $100K in Saint‐Petersburg. She also completed a semifinal run at WTA 125K Series event at Limoges (l. Garcia) ending the season at No.161

She began the 2017 season by making the Grand Slam main draw debut at Australian Open, advancing to the second round (as qualifier, l.Pavlyuchenkova). She then reached the semifinal on home soil at St Petersburg (l. eventual champion Mladenovic) in only sixth tour‐level main draw appearance: she had never moved past the second round in her career. During that tournament, she claimed her first Top 50 wins over No.45 Shvedova and No.27 Kasatkina, before advancing to the semifinal after Halep conceded walkover with a left knee injury.

On grass, she was runner up in 's‐Hertogenbosch (d. Konjuh in SF, l. Kontaveit in F), in her maiden WTA final. She completed the season with a semifinal in Moscow, after upsetting Cornet to clinch her sixth Top 50 win, and completed her maiden Top 100 season.

Daniil Medvedev will become world No. 1 next year, says Vikhlyantseva

'When Roger Federer heads into the court, time stops' -Vikhlyantseva

Can Natalia Vikhlyantseva create upsets after her Moscow semifinal?