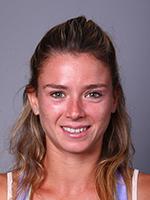 Camila Giorgi was born in Macerata to Argentinian parents of Italian descent. Her parents are Claudia Gabriella Fullone, who designed her different dresses, and Sergio Giorgi, who fought in the Falklands War against the British. Giorgi is one of four children. She had a sister named Antonela who died in a car accident in Paris.

Giorgi played her first career professional tournament in 2006 at ITF level in Baku. She won her first ITF tournament in 2009 in Katowice ($25k) and Toronto (50k). She made her tour-level main draw debut as a qualifier at 2011 Wimbledon. There she reached the round 16 in 2012 (as qualifier, l. eventual R-Up A.Radwanska) claiming her joint-best Grand Slam result. After that, she made her Top 100 debut on July 9, 2012.

Giorgi, who moved to the third-round at Wimbledon (l. eventual champion Bartoli) and the round 16 at Us Open (l. Vinci), had never reached WTA quarterfinals until 2014, her first Top 40 season. That year she was runner-up in Katowice, where she lost to Cornet 76(3) 57 75 in the final missing match-point at 5-4 in the third set, and Linz, where she held a match point in the decider and lost to Karolina Pliskova 67(4) 63 76(4). She also clinched the semifinals in New Haven (l. to Rybarikova) and four quarter-finals in Strasbourg, Eastbourne, Bad Gastein and Moscow.

She lost the season opener to Bogdan in her first match since 2017 US Open (due to elbow injury). Then she won through qualifying to reach the semifinal in Sydney (l. eventual champion Kerber), defeating No.13 Stephens and former champions Kvitova and Agnieszka Radwanska en route. She completed that part of the season with a second round exit at Australian Open (l. Barty).

She reached the third round at Roland Garros for her best result in Paris (l. eventual runner-up Stephens, having twice served for match). Previously, she had made the semifinals in Prague (l. Buzarnescu after serving for match in third set) and the quarterfinals in Lugano (l. Sabalenka).

On grass, she advanced to her first Grand Slam quarterfinal at Wimbledon (l. eventual runner-up Serena Williams) on her 26th appearance at this level; she became the first Italian woman to reach that stage of Wimbledon since Schiavone in 2009 (l. Dementieva).

She began the North American hard court season with a second-round showing at Cincinnati (as qualifier, l. Keys) and Us Open (l. Venus Williams). In Asia, she made the first career-semifinal in Tokyo and that run guaranteed her return to Top 30 for the first time since August 2015.

In Japan, she defeated No.2 Wozniacki in the second round to seal the best victory of her career. In the last tournament of the season, she reached the final for the second time in Linz where she had lost to Karolina Pliskova in three sets in 2014. The Italian defeated Alexandrova to collect her second career WTA title after her first triumph in 's-Hertogenbosch in 2016. Giorgi ended the season with 29 tour-level wins, the most victories she has posted in a single season.

Serena Williams: ‘I really want to enjoy this year and have fun’