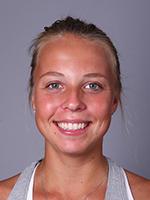 On 1 May she cracked the top 20 for the first time. Coached by her mother until the age of 11, as a junior she finished runner‐up in 2012 US Open girls’ singles, and won the 2011 Orange Bowl defeating Bouchard and Putintseva along the way.

In 2017 she reached her first WTA singles final of career in April, finishing R‐Up indoors at Biel (l. Vondrousova in F). Her clay court campaign highlighted by reaching first two Premier‐level QF at Rome (upset World No.1 Kerber in 2r, l.Halep) and Stuttgart (l. Sharapova). She won first her WTA singles title of career on grass at ‘s‐Hertogenbosch (d. Vikhlyantseva in F) and lost to Bertens in Gstaad in the title-match. She then failed to win two matches in a row until the end of the year and finished the season ranked No.34.

In 2018, Kontaveit completed her first top-30 season at No.21. At Australian Open, she won back-to-back matches for the first time this season: she upset No.7 Ostapenko en route to the fourth-round (l. Suárez Navarro). She scored her 50th career main draw victory in Dubai (d. Stosur) before falling in the second round (l. Osaka) and starting a four-match losing streak.

In Stuttgart, she made the semifinals stage (l. eventual champion
Karolina Pliskova), beating Mladenovic in over three hours (3:09) in the opening match and needed 2 hours and 57 to seal her quarterfinals win over Pavlyuchenkova. She enjoyed a fruitful clay swing in 2018, including a round-16 run at Roland Garros (l. eventual R-Up Stephens) and a semifinal showing in Rome (l. eventual champion Svitolina).

On grass, she didn't clinch wins before Wimbledon, where she reached the third round for the second time (also 2017) where she fell to Van Uytvanck.

She began the summer hard court season with a second-round showing in Montréal (l. Kvitova); her first-round victory over Makarova was her first in North America since 2017 Miami. Then, she advanced to the round 16 in Cincinnati (l. eventual champion Bertens) and for the first time passed USD $1 million in a single season.

During the Asian Swing, she posted a runner-up finish in Wuhan (l. Sabalenka), scoring the sixth Top 10 win of 2018 over No.9 Stephens en route to her fourth career tour-level final, and the lone of 2018.

She made the round 16 in Beijing (l. eventual champion Wozniacki) and reached quarterfinals in Moscow (l. Jabeur). She contested Zhuhai at a career-high ranking of No.20 (first posted week October 22, 2018). She lost to Mertens and beat Goerges in three sets to seal the 33rd win of the season. This is the first time she has registered 30 or more victories in a single year, but she failed to reach the semifinals.

Maria Sharapova shares what she missed the most about competing

Maria Sharapova is a great competitor, win over her feels good - Kontaveit