Back in 2004, players born in 1986 and 1987 were still making their first steps on the professional circuit, mixing the junior events with Challengers and occasional excursions on the ATP Tour. Well, almost all of them. Rafael Nadal was a little bit different type of competitor, making giant steps towards the place in the top-100 in 2003 and starting the next season ranked inside the top-50, still at the age of 17!

The Mallorca native was a perfect mixture of an amazing physical strength already at such a young age, unlimited determination, talent and determination to improve in every match he played, reaching the first ATP final in Auckland in the second week of the season.

Rafa lost to Dominic Hrbaty 4-6, 6-2, 7-5 but that only motivated him to work even harder, scoring some nice wins at the Australian Open, Milan, Dubai, and Indian Wells, almost always as by far the youngest player in the draw.

Nadal defeated a former Wimbledon champion Goran Ivanisevic in the second round of Miami, setting up a meeting with the newly-crowned world no. 1 Roger Federer on March 28 as the opening chapter in one of the biggest rivalries that the world of tennis has ever seen.

At the age of 17 years, nine months and 25 days, Rafael Nadal scored a sensational 6-3, 6-3 triumph in just 70 minutes to become the youngest player since 1990 who managed to defeat the best player in the world (Michael Chang was a year older when he took down Stefan Edberg at Grand Slam Cup in 1990).

Despite the obvious quality and iron will, no one could have seen this coming, not against the player who won the Australian Open, Dubai and Indian Wells and who lost just one match since the start of the year. A week before, Roger claimed the title in Indian Wells and had only a few days to recover physically and prepare for Miami, feeling signs of illness and fever and never looking good on the court.

The Swiss barely survived a challenge from Nikolay Davydenko in the previous round and had nothing left in the tank for the young Spaniard, bowing out in straight sets and sending a teenager through to the last 16. All that aside, we should not take anything from Nadal's triumph as it certainly was an impressive one, playing with no signs of nerves and doing just about everything right on the court, from choosing right tactics to throwing everything he had on Roger valiantly.

Rafa did huge damage with his topspin forehands that bounced high and took time off from Federer's shots who never settled into his usual rhythm. The Spaniard's defense was already one of the best in the game, building a fortress around the baseline that was almost impossible to penetrate.

He didn't lean only on that, though, attacking whenever he could and playing some well-constructed points at the net, mixing the shots nicely to keep the points on his racquet, never allowing Federer to step in and take charge with his forehand.

Nadal did struggle with his backhand although that couldn't hurt him much since Roger played below his level and experienced his second loss of the year, a rather unexpected one. Nadal's serve gave him a huge advantage in the first meeting with Roger, never facing a break point or a deuce in his games and opening the space to play more aggressively on the return, which he did.

Also, Rafa served at 81% and won 31 out of 39 points after landing the first serve in, impressive numbers for a player who's initial shot is not a prime weapon in his arsenal. Nadal's second serve worked like a charm (had to play just nine points on weaker serve, though) and he lost just 12 points in nine service games overall, something he could have only dreamed about before the start of the match.

On the other hand, Roger was unable to follow those numbers behind his serve, dropping almost 40% of the points and having to play against seven break points, getting broken three times which was all Nadal needed to bring the win home.

Federer had 16 service winners although some of his serves were very slow, giving Nadal no troubles to return them and gain the immediate advantage in the rallies, sending the balls back to Roger's backhand (especially in the second set) and standing strong in the rest of the exchange.

Rafa finished the encounter with nine service winners and had a 14-11 advantage in the winners from the field, hitting with more variety than his rival who had only two winners outside his forehand. The Swiss made 17 unforced errors, 12 from his stronger wing, while Nadal stayed on 14, mainly thanks to his backhand.

The Spaniard forged the biggest difference in the forced errors segment, hitting just three from his backhand while Roger counted to 16! That is another nice illustration of who was the more aggressive player and who had the upper hand in the rallies.

Federer had the edge in the shortest points up to four strokes (31-27) thanks to those service winners but everything else was on Nadal's side. Rafa demolished the opponent in the mid-range rallies from five to eight shots, taking 20 from 27 and also clinched 11 of the longest 16 points to make his victory clean as a whistle.

Federer opened the match with two service winners and Nadal added two errors from his backhand, responding with a good hold in game two after taking two 8-stroke rallies to get his name on the scoreboard without difficulties, which was important for the youngster.

Roger had three unreturned serves in game three, same as Nadal in the game that followed, including another impressive rally with 13 shots. The set was decided at 2-2 when Rafa converted the third break point and gained the advantage, returning well and covering the court exceptionally to leave his rival with no answer.

Federer fended off the first break point with a service winner, Nadal couldn't control his backhand on the second although the third proved to be a lucky one when Roger sprayed a backhand error. Rafa again lost two points on serve in game six (his backhand was still off), still closing the game with a good attack and forcing another mistake from his opponent to move 4-2 ahead and confirm the break.

Roger's serve was nowhere near the required level and he faced a couple of break points in game seven after two forehand return winners from Nadal. With no margin for mistakes, the Swiss saved the first with a service winner and the second with another short point, bringing the game home with two forehand winners right after the serve to reduce the deficit to 4-3 and stay in contention.

Nadal had to be careful at 30-30 in the following game but he showed no signs of hesitation, taking a great 16-stroke rally and closing the game with a smash at the net for a 5-3, moving closer to grab the opening set. Federer had to give the serve away in the ninth game as well, committing four errors in a row from 30-0, unable to find the right strokes or to penetrate his rival, taking some risky shots which didn't pay off.

The Spaniard served at staggering 86%, winning 16 out of 19 points after landing the first serve in and placing it well and with a lot of variety to sail through his service games and mount the pressure on the other side of the net.

Keeping his coolness in those games when he lost two points, Rafa never let Roger reaching deuce or a break point, creating six break chances and converting two. Roger had ten service winners against five from Nadal but the Spaniard toppled him in the winners from the field, hitting seven in comparison to Federer's five.

They made a similar number of unforced errors (9-8 for Roger) and it was the forced mistakes that delivered the set for a teenager as he made just one against eight from the world no. 1. Carried by this momentum, Nadal continued where he left in the first set, earning a game point with a volley winner at the start of the second set and bringing a game home after another mistake from Roger who was unable to impose his shots and keep the points on his racquet.

In the second game, Federer had a dominant hold with two service winners and two more from his forehand, something he needed badly against such a strong opponent who was ready to fight for every ball. The Swiss won a pulsating 25-stroke rally at the start of the third game before Nadal recovered quickly to move in front with two winners and another error from Federer.

The fist groundstroke after the serve did a great job for Nadal, giving him the opportunity to control the points with his lethal forehand and keeping Roger off balance and away from the comfort zone. The sixth game proved to be the crucial one when Roger wasted a 40-0 lead to lose serve and give Rafa a huge advantage after everything he sowed so far in the match.

Federer opened the game with three winners but instead of bringing it home he made some huge forehand mistakes to bring Rafa back into the game. An amazing backhand crosscourt winner gave Nadal a deuce, defending great in the next point to earn the break point and Roger did the rest, saving his worst forehand for the final point to suffer a break and see the clear writing on the wall.

Everything was in the Spaniard's hands now and he remained calm like this was some regular Challenger match against a player ranked outside the top-200. He won two longer exchanges in game seven to build a 5-2 advantage before Federer extend the match with a good hold, reducing the deficit and leaving Rafa to serve for the triumph.

Nadal wrapped up a victory in style after three errors from Roger and a smash winner in the final point, starting a huge celebration of what had been by far the biggest win of his young career. In set number two, Federer had a slim 6-4 advantage in service winners which could never give him much, with Nadal leading 7-6 in the winners from the field department.

Roger made more unforced errors (8-6) and was again beaten badly in the forced errors, with Nadal staying on two, six less than Federer who committed eight, just like in the first set. 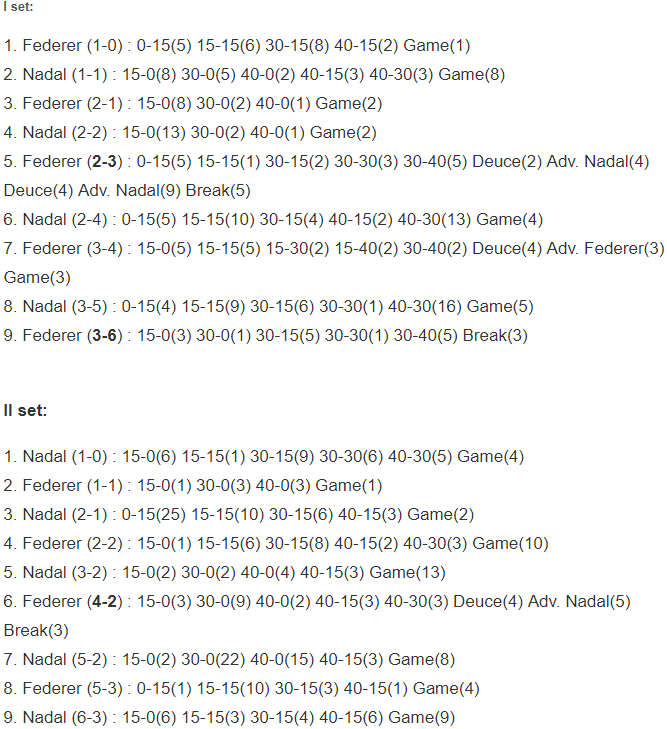 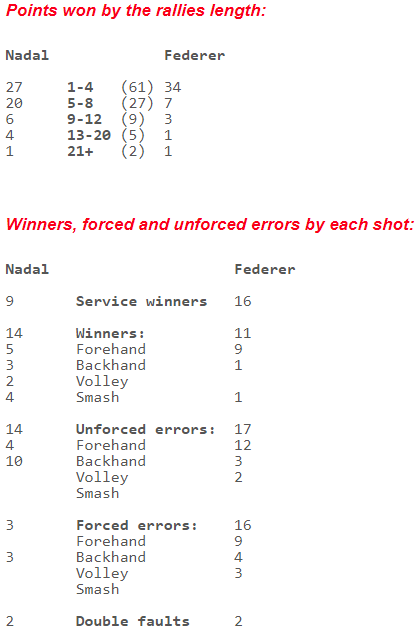