After the second Grand Slam of the season in Paris, the time is perfect for checking the ATP Live Race to London list once again and notice the most significant changes in the battle for eight London tickets. After Roland Garros, there are no players with more than two ATP titles although some players have performed better than the rest of the field on the biggest scene that includes two Grand Slams and five Masters 1000 events.

Following three semi-final defeats in Monte Carlo, Barcelona and Madrid, Rafael Nadal conquered Rome and Roland Garros to put 3000 points into his pocket and become the leader of the Race to London with 5505 points, 800 more than Novak Djokovic who is on 4725.

Nadal played on a very high level in Paris, dropping two sets in seven encounters and gathering 2000 points that propelled him ahead of Novak, with the battle for the year-end no. 1 spot standing wide open between two great rivals.

Djokovic lost to Dominic Thiem in the semi-final and will try to bounce back at Wimbledon and chase that top spot in the Race once again, winning the title at the All England Club a year ago. Just a few weeks before his 38th birthday, Roger Federer is the third-best player of the season, winning Miami and reaching the first Roland Garros semi-final since 2012, delivering five convincing wins before Nadal halted him in straight sets, leaving him on 3360 points so far in 2019 and on a 27-4 score.

Roger is just 55 points ahead of Roland Garros finalist Dominic Thiem who is the fourth and so far the last player who has passed the 3000-point mark this year following his performance at Indian Wells, Barcelona and Madrid.

Stefanos Tsitsipas is the leader of the pack together with Rafael Nadal in terms of the triumphs on the Tour (32) and looks like a safe passenger for London, accumulating 2940 points thanks to yet another solid campaign in Paris that had to end in the fourth round against Stan Wawrinka in what was the match of the tournament.

The young Greek is 1230 points clear of Kei Nishikori in the sixth place, with the Japanese losing in the quarter-final in Paris to Nadal. The Russian Daniil Medvedev made a rock-solid start of the clay campaign, only to lose form and drop the opening match in Madrid, Rome and Roland Garros, missing a chance to add more triumphs to his tally and challenge the rivals ahead of him even more seriously.

Daniil and Fabio Fognini are the last players who would have qualified for London at the moment, followed by the defending ATP Finals champion Alexander Zverev, Gael Monfils, Roberto Bautista Agut and Stan Wawrinka. The mentioned players will try to reduce the gap in the next couple of weeks on grass and get into contention for the last three places at the ATP Finals, with Nadal, Djokovic, Federer, Thiem and Tsitsipas looking safe at the moment to play in the final ATP event of the season in November. 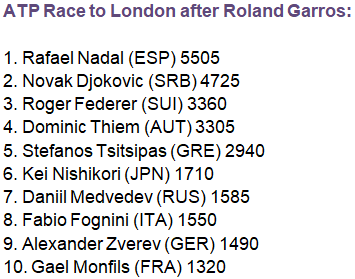 TODAY'S MOST POPULAR
SERENA WILLIAMS
Serena Williams: 'For the first time in my career, I didn't come to win tournament'
Rafael Nadal: 'It has caught me at an advanced age and...'
'Roger Federer's actual game is way better than mine', says American star
Simona Halep: 'I didn't feel great and my energy was low'
WTA Prague: Eugenie Bouchard battles past Tamara Zidansek. Sorribes Tormo advances
Naomi Osaka practices with Tommy Haas 'He's so good'
Toni Nadal: I asked Roger Federer & Johan Cryuff why they were so good & they said...
THIS WEEK MOST POPULAR
ROGER FEDERER
'Roger Federer is not that important to tennis', says former Australian champion
Nick Kyrgios shows off £164k custom Dodge SRT Demon
Roger Federer's kids take part in a tennis camp in Switzerland
WTA Lexington: Serena Williams to face sister Venus or Victoria Azarenka in R2
Top coach understands the decisions of Roger Federer and Novak Djokovic
Carlos Alcaraz: I don't want to compare myself to Rafa Nadal because....
'Have heard Roger Federer and Nadal thank the spectators for...', says top coach